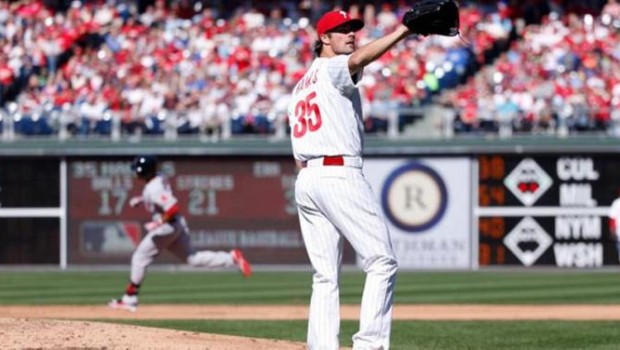 If Monday’s opener is any indication of what the rest of the 2015 Phillies season will look like:

We are in for a long summer!

The Phillies trotted out their ace pitcher, Cole Hamels, against the Boston Red Sox, and he got hammered.

Hamels gave up five hits in five innings, striking out six. He allowed four homers for the second time in his career.

Ramirez made quite an impression in his first game since the free agent signed an $88 million, four-year contract. He hit a solo homer in the fifth and a grand slam off Jake Diekman in the ninth.

The Red Sox have been considered front-runners to land Hamels since the rebuilding Phillies made the 2008 World Series MVP available. But Boston isn’t going to trade its best prospects for this version of Hamels.

Red Sox slugger David Ortiz kept both feet in the batter’s box for nearly every pitch during his four at-bats, going 0 for 4 with three strikeouts. Ortiz made it clear in spring training he doesn’t like baseball’s new pace of play rules, but he adhered to them in his first game. The only time he stepped out was after fouling a ball off his foot.

The revamped Red Sox spent $183 million on Ramirez and Pablo Sandoval, hoping their offense can lead them to another worst-to-first season like they had when they won the World Series in 2013.

Sandoval was 0 for 5 with two strikeouts.

Buchholz didn’t allow a hit until Ryan Howard lined an 0-2 pitch for a double with two outs in the fourth. Junichi Tazawa tossed a perfect eighth and Tommy Layne finished off the three-hitter.

Pedroia hit a towering drive out to left-center in the first inning to give the Red Sox a 1-0 lead. Betts lined one out to left leading off the third.

In the fifth, Pedroia connected again for his first multihomer game since Sept. 13, 2011, against Toronto. One out later, Ramirez hit a deep drive to left-center.

Pedroia snuffed Philly’s rally in the seventh inning. After consecutive one-hit hits, Pedroia made an excellent play at second base on Cody Asche’s hard one-hopper and turned it into a fielder’s choice. Buchholz then struck out Freddy Galvis to end the inning.

A sellout crowd enjoyed opening-day festivities at Citizens Bank Park, including players doing their traditional entrance from the outfield stands. Many seats were empty long before the game ended, a sign of what’s likely to come this summer.