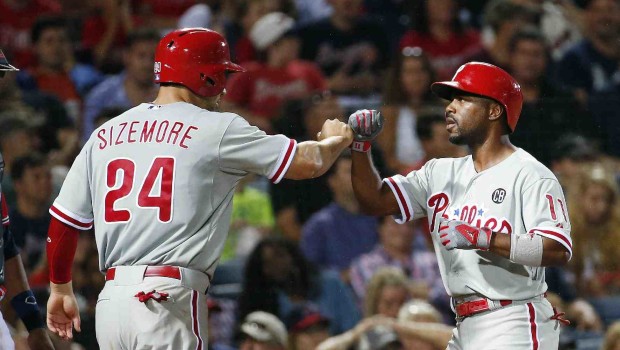 HAMELS, PAPELBON AT TOP OF THEIR GAMES IN PHILS’ WIN

The Phillies won a game last night in Atlanta and two of their pitchers displayed their finest to teams that might want to deal for them before the July 31 trade deadline.

Cole Hamels held the Braves to four hits through seven innings, Jonathan Papelbon got the save in the 2-1 victory.

Hamels (4-5) won for the second time in three starts, giving up one run, striking out nine and walking none. He threw 71 of 95 pitches for strikes.

Atlanta, which had a three-game winning streak snapped, cut its deficit to 2-1 in the seventh inning on Chris Johnson’s RBI double.

Papelbon earned his 21st save in 23 chances, needing only five pitches to retire Andrelton Simmons on a groundout, Freddie Freeman on a lineout, and Justin Upton on a popup.

Grady Sizemore reached base four times, going 3 for 4 and scoring on Rollins’ homer.

The only baserunner Hamels allowed through the first 4 2-3 innings was Jason Heyward, who was hit by a pitch in the second. Tommy La Stella got the first hit off Hamels, a double in the fifth.

Hamels made 50 of his first 65 pitches for strikes before pinch-hitter Tyler Pastornicky singled in the sixth.

Braves starter Aaron Harang pitched six scoreless innings, allowing five hits and three walks with five strikeouts. The right-hander, who had won his last four starts, has a 2.18 ERA in his past five outings.

Hamels, 3-3 with a 1.78 ERA in nine road starts this year, received a no-decision in Atlanta on June 16 despite pitching seven scoreless innings in Philly’s 13-inning victory.

Hamels improved to 15-8 with a 3.34 ERA in 31 starts and one relief appearance against the Braves. Ben Revere pinch-hit for him in the eighth.

Phillies manager Ryne Sandberg unsuccessfully challenged that Johnson was thrown out at second base in the seventh. Johnson, who drove in Upton from second, stretched a single into a double by beating Chase Utley’s tag attempt.