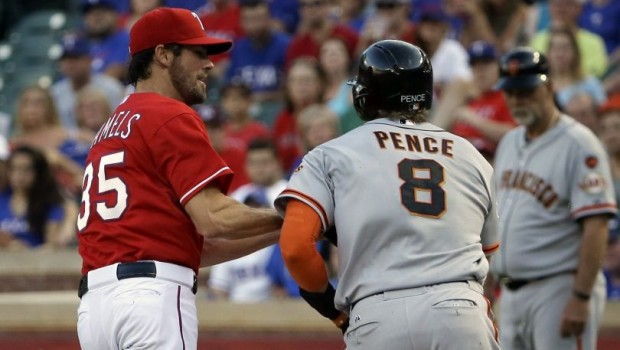 HAMELS ROCKED BUT FEELS RIGHT AT HOME ON THE TEXAS RANGE!

Hamels (tagging out former Phillies teammate Hunter Pence, above) allowed five runs, eight hits and two homers against the Giants. He walked one and struck out six. More important, he pitched three consecutive scoreless innings in the middle of the game as the Rangers rallied from a 3-2 deficit to take a 7-4 lead.

The crowd of 41,114 at Globe Life Park in Arlington rose as one to applaud new pitcher Cole Hamels as he handed the ball to Rangers manager Jeff Banister and walked off the mound Saturday night with two outs and a three-run lead in the eighth inning.

They didn’t seem to mind that Hamels’ performance was a lot more like the two in which he was rocked two weeks ago as a Phillie and decidedly unlike his no-hitter last Saturday against the Cubs.

Hamels, acquired Friday in an eight-player trade with the Phillies, acknowledged the fans with a brief wave and a smile before entering the dugout to an assortment of handshakes and fist bumps from his new teammates.

“It was mind-blowing,” said Hamels, who had been in Arlington less than 24 hours before making his first start.

“You obviously want to go out there and throw a no-hitter, but I’m out there trying to do what I can. Getting that ovation from the fans is hard to describe.”

“It’s the ultimate excitement,” Hamels told ESPN.com. “It definitely humbles you in a sense. But you have to really appreciate that they enjoyed what I was able to do, even though I wanted to go out there and put up more zeros than I did.”

Too bad reliever Tanner Scheppersblew the save, ruining Hamels’ debut, as the Giants tied the score in the ninth and won it in the 11th.

In the seventh inning on Saturday, Hamels showed why he has pitched more than 200 innings in each of the past five seasons. He knows how to survive without his best stuff.

San Francisco got to Hamels for five extra-base hits, but he kept the Giants’ hitters off balance with a filthy changeup. Of his six strikeouts, four came on changeups.

After a leadoff homer by Buster Posey pulled San Francisco within 5-4 in the seventh, Hamels retired the next two batters. A single by Justin Maxwell and a walk to Brandon Belt brought Rangers pitching coach Mike Maddux to the mound.

On Hamels’ next pitch, Brandon Crawford grounded into an inning-ending double play.

Hamels retired the first two batters in the eighth inning before allowing a double by Joe Panik. Hamels had thrown 97 pitches and 61 strikes to that point on a night when the starting-time temperature was 94 degrees, so Banister removed him.

“Given everything involved — coming off the no-hitter, everything swirling around the trade, the travel getting him here — he’s really been here for about a day and some change,” Banister said. “All those factors were involved, and it was a situation where really we wanted to give the bullpen some room, which we did.”

Hamels was working on six days of rest after throwing 129 pitches in his July 25 no-hitter against the Chicago Cubs. Clearly, he didn’t have his best stuff in his first outing with the Rangers, though he seemed in control much of the game.

Hamels allowed five runs, eight hits and two homers against the Giants. He walked one and struck out six. More important, he pitched three consecutive scoreless innings in the middle of the game as the Rangers rallied from a 3-2 deficit to take a 7-4 lead.

In the first inning, Elvis Andrus made a diving stop on a ball up the middle and a strong throw to first base to retire Matt Duffy.

In the second frame, Delino DeShields made a leaping catch against the center-field wall to rob Posey of extra bases.

And in the fifth, Hamels helped himself by hustling to cover first after Belt’s wicked line drive ricocheted off first baseman Mitch Moreland’s glove. Second baseman Rougned Odor moved to his left, grabbed the ball with his bare hand and made a strong waist-high throw to Hamels, who caught the ball as he arrived at the bag.

None of that, though, was enough to get a victory.

“It’s crazy,” Hamels said. “Getting here and getting ready for the game, you try to keep to your routine. But it’s a new clubhouse and a lot of new beginnings, so you have to kind of find yourself.”

Now that the hoopla is over, it’s time for Hamels to establish a routine, settle into his new home and anchor the Rangers’ rotation.