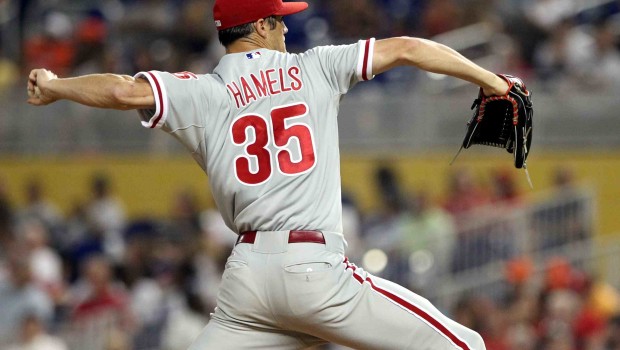 The Phillies suffered their 11th shutout in 84 games in Wednesday’s 5-0 loss to the Marlins at Marlins Park. No Phillies team has been shut out more through 84 games since the 1941 Phillies, who had 12 on their way to a 43-111 season.

“It is hard to believe,” Phillies manager Ryne Sandberg said.

There is frustration in the Phillies clubhouse. The Phillies have lost six consecutive games and 10 of 12 to fall to 36-48. They are in last place in the National League East, 10 1/2 games out of first place. They are a season-worst 12 games under .500 with the July 31 trade deadline four weeks away.

Phillies left-hander Cole Hamels has seen and heard plenty over the past couple of seasons. He had a 1.88 ERA in his previous 10 starts, pitching seven or more innings in each one. But he stumbled Wednesday as he struggled with his command, allowing five hits, three runs and four walks in five innings.

It would be plenty for the Marlins.

Hamels probably knew that. He entered the night 120th out of 132 pitchers in baseball with a 3.59 run support average over the past two seasons.

Hamels has $96 million remaining on his contract following the season and a limited no-trade clause, which could be obstacles.

Because of that, he could be one of the last veterans standing at the end of the month.

“It’s kind of a tough situation,” said Hamels, when asked if he can picture himself in a losing situation the next couple of years. “I think it’s more in their hands and the decisions they make. All I can do is be accountable for what I do on the field and prepare. … It definitely wears on you.

“You just have to try to battle through. It just hasn’t shown in the last year and a half. And you don’t know when it will show. Everyone just has to take care of business the best they know how and try to be accountable.”