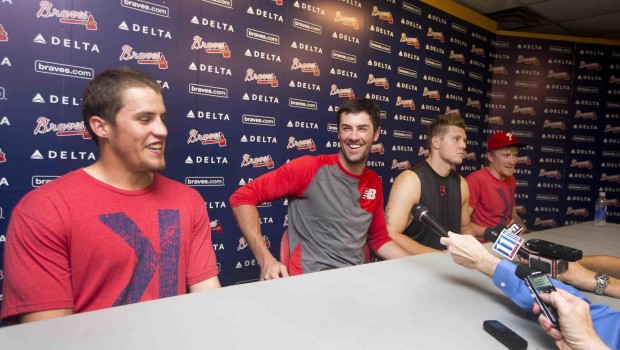 Giles (left), Hamels and Diekman (right) were all smiles, Papelbon not so much.

Cole Hamels, Jake Kiekman, Ken Giles and Jonathan Papelbon teamed up for the fourth no-hitter of the major league season Monday and first combined no-hitter in more than two years, a 7-0 Phillies victory over the Braves in Atlanta.

Diekman, Giles and Papelbon each threw a perfect inning to finish the first combined no-hitter in Phillies history and the franchise’s first of any kind since Roy Halladay against Cincinnati in the 2010 Division Series.

Halladay also threw a perfect game in 2010, against the Florida Marlins.

Hamels was removed for a pinch-hitter after six innings, walking five, striking out seven and hitting a batter. The Phillies led 2-0 at the time but Hamels had thrown 108 pitches.

He’s exceeded that pitch count in eight of his 24 starts this season, including a high of career-high 133 in seven innings against the New York Mets in May. He last threw more than 108 pitches six starts ago on July 29.

But Hamels said there was little argument when manager Ryne Sandberg removed him for a pinch hitter before he could pitch the seventh.

“I understand,” Hamels said. “I wasn’t so caught up in the no hits because I understood my pitch counts. I was able to get away with six innings. I didn’t have as much control as I would like.”

Then it was pretty much business as usual for the Phillies bullpen.

Diekman, the first reliever, was surprised when he got to the mound.

“I had no idea (it was a no-hitter) until I ran out and looked at the scoreboard,” he said.

And just a bit confused after first baseman Darin Ruf grabbed a soft liner off the bat of Phil Gosselin for the final out and all the Phillies congregated at the mound for something less than the usual no-hitter celebration focused on one pitcher.

“I have no idea what to do right now,” Diekman said after the game.

Papelbon said he wasn’t even sure if he’s ever been part of a no-hitter. He hasn’t.

Hamels’ game moved him into third place in the National League in earned run average at 2.50, the lowest of his nine major league seasons, but his record is just 8-6 this year. He had six consecutive double-digit victory seasons capped by a career-best 17 in 2012, but slipped to 8-14 and a 3.60 ERA last year.

All four no-hitters this season have been in the National League, the previous ones by Josh Beckett and Clayton Kershaw of the Dodgers and Tim Lincecum of the San Francisco Giants.

Hamels, who is in the second year of a six-year, $144 million deal, was discussed on the trade block this summer, as the Phillies seek to rebuild after a third consecutive season missing the playoffs. While a trade was termed unlikely, Hamels is the lone player tied to a big deal that has significant trade value. He entered Monday 106-80 in his career.