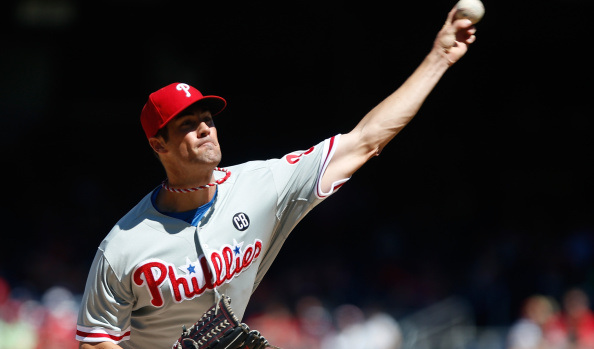 Cole Hamels may only be 9-7 this season but he continues to handle the San Diego Padres like he owns them.

Hamels dominated the Padres again as the Phillies beat the Padres 5-2 on Wednesday night, ending a three-game losing skid.

Hamels (9-7) struck out nine in seven innings and allowed a run as he scattered seven hits and a walk. It marked Hamel’s 21st straight start in which he was charged with three runs or less.

Hamels, who attended nearby Rancho Bernardo High and grew up a Padres fan, is 9-2 against San Diego.

Ben Revere had two RBIs and two hits to pace the Phillies.

Yangervis Solarte, Tommy Medica and Cameron Maybin each had two hits for the Padres.

Eric Stults (7-17) took the loss, pitching 4 1-3 innings and giving up four runs and six hits. His 17th loss ties the Phillies’ A.J. Burnett, who lost Tuesday night, for the most in the majors.

Stults retired 12 straight before the Phillies opened the fifth with four consecutive singles. The fourth one, by Freddy Galvis, drove in Darin Ruf and Domonic Brown for a 2-1 lead. After Hamels’ sacrifice bunt, Revere’s two-run double chased Stults and pushed the Phillies ahead 4-1.

In the fifth, Carlos Ruiz’s sacrifice fly scored Ruf for a 5-1 cushion, after Ruf doubled and advanced to third.

The Padres struck first in the fourth when Maybin’s second hit drove in Medica. After leading off the inning with his second single, Medica stole second base and scored easily on Maybin’s single.

In the previous inning the Padres loaded the based when Hamels walked Stults, which followed Medica and Maybin hits. But Solarte flied out to right to end the threat.