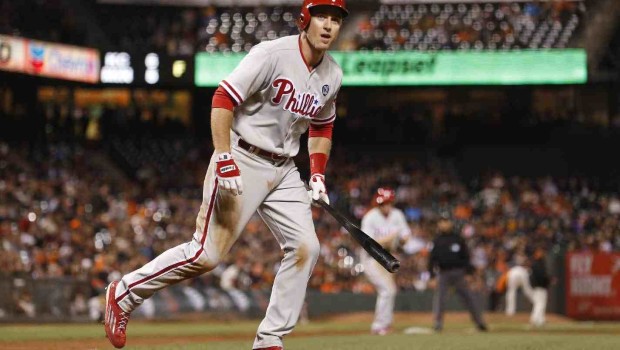 Cole Hamels did everything Friday night against the Giants but get the win, as usual.

Chase Utley was hit by a pitch with the bases loaded (photo above) in the top of the 10th inning to help the Phillies beat the San Francisco Giants 5-3.

Ryan Howard followed with a sacrifice fly against Javier Lopez, and the Phillies snapped a three-game losing streak.

Cody Asche, who doubled off Santiago Casilla (1-3) to open the 10th, hit a two-run homer in the eighth to tie it. It was the first home run allowed by Jeremy Affeldt this season.

Ken Giles (2-0) pitched two scoreless innings for the win. Jonathan Papelbon worked the 10th for his 28th save in 31 chances.

Madison Bumgarner threw seven strong innings for his first quality start at home since June 10, a span of seven games. He allowed one run and four hits, striking out nine without a walk.

Cole Hamels also delivered a quality start for Philly, giving up three runs and nine hits over seven innings. He walked two and struck out five.

Pablo Sandoval had three hits, but the Giants lost their sixth in seven games.

Bumgarner retired the first 10 hitters he faced, five on strikeouts, before allowing back-to-back hits by Jimmy Rollins and Utley.

Hamels let the leadoff hitter reach base in five innings and had baserunners every inning. He was able to avoid trouble with the exception of the fourth.

Buster Posey led off with a single and Sandoval hit a ground-rule double ahead of Michael Morse’s first home run in August, a three-run drive into the left-field seats.

Marlon Byrd countered with his 23rd homer leading off the fifth.