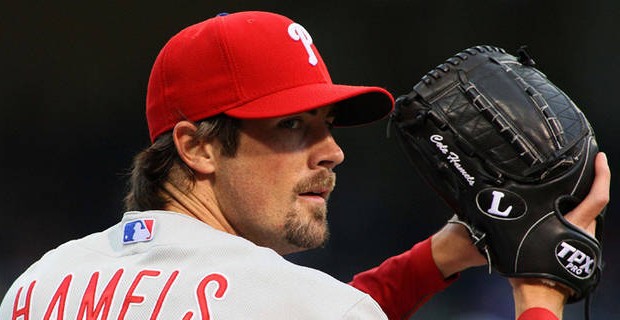 It wasn’t that long ago that tonight’s Phillies-Giants match-up in AT&T Park would have been appointment television:

Two National League elite teams throwing their best pitchers at one another.

While Cole Hamels (above) will likely pitch one of his final games for the Phillies, Madison Bumgarner will try to bounce back from one of his worst this season for the Giants (10:15 on CSN).

The matchup between the only World Series MVP pitchers in the last 11 years will open a series between their scuffling clubs Friday night.

The left-hander has received a combined six runs of support in that drought and his teammates don’t appear poised to give him much help in this one. The Phillies (29-59) endured back-to-back shutouts to end a four-game visit to the Los Angeles Dodgers and had two hits in a 6-0 loss Thursday, their 12th in 15 games.

Bumgarner (8-5, 3.34) will try to bounce back from a 9-3 loss in Washington on Saturday, one of San Francisco’s eight defeats in its last nine games. The lefty gave up six runs in five-plus innings – three in the first – after logging a 2.03 ERA in his previous four starts.

“It was just one of those days,” Bumgarner said.

Like Hamels, Bumgarner has struggled to get consistent run support with a combined eight in his last five games. San Francisco (43-43) has scored nine runs in its past six contests while batting .183.

The Giants had five hits in a 4-1 loss to the New York Mets on Wednesday and are in danger of dropping below .500 for the first time since they were 17-18 on May 14.

“We’ve got to find a way to get some runs. This offense is too good,” manager Bruce Bochy said.

Buster Posey was out of the lineup for the second straight contest because of an ailing right hamstring, and his status is unclear. Posey is batting .364 in 24 career games against Philadelphia and is 9 for 18 lifetime against Hamels.

Bumgarner allowed five runs while striking out 11 over eight innings in a 7-5 victory in Philadelphia on June 6. He is 3-2 with a 3.40 ERA in seven starts against the Phillies, beginning with one in the 2010 postseason.

Hamels is 1-0 with a 1.57 ERA in his past three starts against the Giants, but has a 4.61 ERA at AT&T Park – his highest at any NL park. Hamels and Bumgarner have opposed each other just once with Hamels giving up three runs in seven innings and Bumgarner yielding one over seven in the Phillies’ 5-3, 10-inning win in San Francisco on Aug. 15.

The Phillies haven’t been shut out in three consecutive games since May 25-27, 2010.