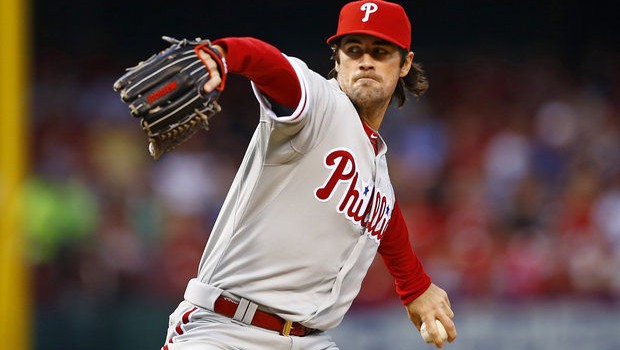 Cole Hamels was on the mound and on display Monday night, and he delivered for the Phillies and impressed the St. Louis Cardinals, who are in the market for a starting pitcher since Adam Wainwright’s season-ending Achilles injury.

Hamels won for the first time in seven starts, and Ben Revere’s two-run double in the seventh inning was the go-ahead hit for the Phillies in a 4-1 victory over the Cardinals Monday night.

Hamels (1-2) and John Lackey (1-1) both went seven innings. Hamels had a season-best nine strikeouts and allowed just four hits, while the Phillies put just two runners in scoring position before their three-run seventh.

The Cardinals have lost two straight since ace Wainwright tore his left Achilles. The team announced before the game that the two-time 20-game winner will miss the rest of the season, and general manager John Mozeliak was optimistic Wainwright will be ready for spring training.

Cody Asche’s infield hit off first baseman Matt Adams’ glove began the Phillies seventh, and Revere’s opposite-field flare on the chalk in shallow left put the Phils up 2-1. Odubel Herrera followed with an RBI single, his third hit of the day.

Carlos Ruiz doubled for his fourth hit leading off the eighth against Matt Belisle and scored on a groundout by Darin Ruf.

The Cardinals needed five baserunners to get a run in the third on Matt Holliday’s RBI single. Mark Reynolds, who got a spot start in right field, grounded out with the bases loaded to end the inning.

Ken Giles had two strikeouts in the eighth and Jonathan Papelbon made it 13 strikeouts for Phillies pitchers while earning his fifth save in five tries.