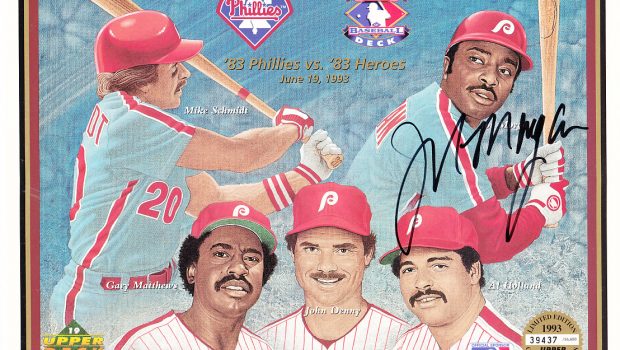 Joe Morgan was near the end of his glorious career when he joined his old Cincinnati Reds mates Pete Rose and Tony Perez on the Phillies in 1983.

He only hit .230, but he had 16 home runs and 59 runs batted in for the National League champs who fell to the Baltimore Orioles in the World Series.

Morgan was a two-time National League Most Valuable Player, a 10-time All-Star and a five-time Gold Glove Award winner. He is widely regarded as one of the best second basemen in baseball history and also gained renown for his 25-plus years as a broadcaster after his playing career.

Morgan had struggled with various health issues in recent years.

Morgan spent the majority of his 22-year career with the Reds and the Houston Astros franchise. Along with Rose and fellow Hall of Famers Johnny Bench and Perez, Morgan helped the Reds win back-to-back World Series championships in 1975 and 1976. Cincinnati also reached the World Series in 1972, Morgan’s first year with the Reds.

Morgan first played in the majors in 1963, when the Astros were the Houston Colt .45’s. He was traded to Cincinnati in November, 1971 as part of an eight-player deal and played the next eight years with the Reds.

After spending the 1980 season with Houston, Morgan also played with the San Francisco Giants, Phillies and Oakland Athletics late in his career before retiring after the 1984 season at the age of 41.

Morgan was inducted into the Baseball Hall of Fame in 1990. He started his broadcasting career in 1985 and worked at ESPN from 1999 to 2010, serving as a member of the network’s lead baseball broadcast team.