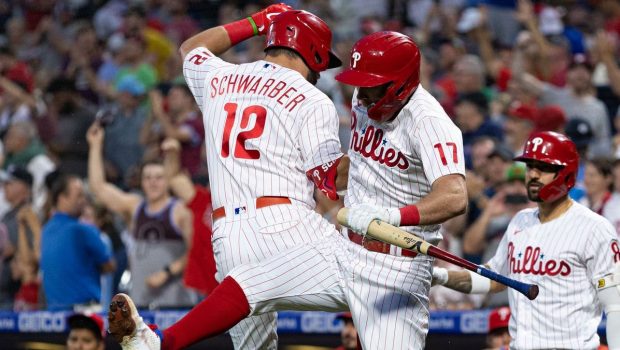 HALL AND HOSKINS POWER PHILS TO 1 1/2 GAMES OUT OF WILD CARD!

Darick Hall’s home run broke a tie and Rhys Hoskins jack helped the Phillies to a 5-3 win over the Cardinals and creep within 1 1/2 games of St. Louis for the last wild card spot.

Hall broke a 3-all tie in the sixth off Miles Mikolas (5-6) — all three of Hall’s hits have been home runs since his arrival from Triple-A Lehigh Valley on Wednesday.

“To be able to come up and perform and help the team is everything,” Hall said.

The 26-year-old Hall went deep twice in Philadelphia’s 14-4 victory over the Atlanta Braves on Thursday night.

“He’s got to be on top of the world right now,” Hoskins said.

Nolan Arenado hit for the cycle for the second time in his career and 17th time in Cardinals history. He had an RBI triple in the first, a two-run homer in the third, doubled in the sixth and was credited with a single in the eighth after his hard-hit grounder caromed off third baseman Matt Vierling’s glove.

“It hasn’t hit me yet because the game didn’t turn out the way we wanted,” Arenado said. “Obviously it’s a rare thing, a special thing. I just thank God I was able to do it today.”

Hoskins gave Philadelphia a two-run cushion in the seventh by homering in his third straight game, a solo shot to deep left-center.

“We got contributions from all over the yard,” Hoskins said. “Pretty cool win. It’s nice to get a win to start the series.”

Mickey Moniak added an RBI double for Philadelphia, which will play six of its next nine games against St. Louis.

The Phillies are 19-8 since interim manager Rob Thomson took over for the fired Joe Girardi last month.

José Alvarado (2-1) pitched two-thirds scoreless innings in relief for the victory, and Brad Hand tossed a scoreless ninth for his third save in four chances.

“They have some swing-and-miss (pitchers) in that bullpen,” Cardinals manager Oliver Marmol said. “Tough night.”

The Phillies took advantage of an error by Arenado in the fifth when they tied the game with three runs. Garrett Stubbs led off with a hard-hit grounder to third base, but it went off the glove of Arenado and Stubbs reached first. After Vierling’s single, Moniak doubled to the wall in right-center to score Stubbs. Vierling and Moniak went on to score on Kyle Schwarber’s groundout and Hoskins’ sacrifice fly.

“They capitalized on it, for sure,” Marmol said.

Mikolas left after 5 ⅓ innings, with two of his four runs allowed earned on six hits with a strikeout and two walks.

“Obviously, he’d rather have the win,” Marmol said. “It’s still special to do that. It’s hard to come by.”