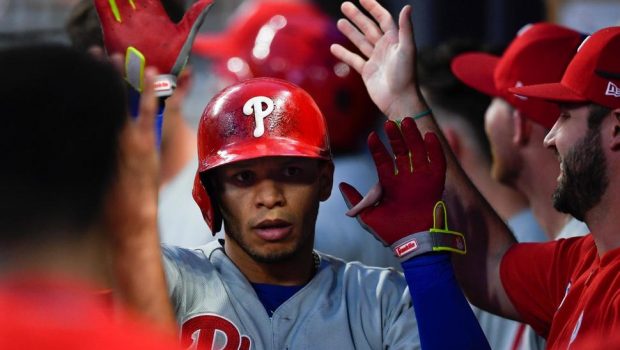 The Phillies finally stopped their bleeding in the NL East.

And a most unlikely source stepped up.

“There’s a lot that went on that could’ve pushed us to not give the kind of effort that we gave,” manager Gabe Kapler said. “A really impressive, heartfelt win by our club, a cohesive team win today. It was great.”

César Hernández singled in two runs off Luke Jackson in the ninth inning, and the Phils rallied to snap the Atlanta Braves’ eight-game winning streak with a 6-5 victory.

It was a big comeback for the Phillies, who looked poised to lose for the fifth time in six games and fall 3½ games behind their rivals in the NL East race.

Philly has dealt with rampant injuries this season and had starters Jay Bruce and J.T. Realmuto leave during the game.

Hernández hit his seventh homer in the fourth to put the Phillies up 4-2.

Josh Donaldson hit a three-run homer in the fifth off Phillies starter Aaron Nola to put Atlanta up 5-4. The Braves were getting big cheers from the sellout crowd of 43,593, the largest yet in three seasons at SunTrust Park, until the ninth.

Héctor Neris, who took the loss on Brian McCann’s two-run single Friday night, earned his 15th save in 16 chances in the bottom half of the inning, retiring Ronald Acuña Jr., Dansby Swanson and Freddie Freeman in order.

“It kind of shows you what our team is capable of doing,” Bruce said. “We have a chance to win the series tomorrow, so it was a big win for us and good bounce-back game.”

Edubray Ramos (1-0) faced four batters in the eighth to earn the victory.

The Phillies scored three times to take a 3-1 lead in the third against Touki Toussaint before Atlanta made it 3-2 in the third when Acuña singled, advanced to second on right fielder Bryce Harper’s fielding error and scored from third on a groundout.

Nola allowed five runs, six hits, two walks and struck out four in 4 1/3 innings. He has a 7.71 ERA over his last three starts.

Atlanta led 1-0 on Austin Riley’s 11th homer in 29 career games in the second.