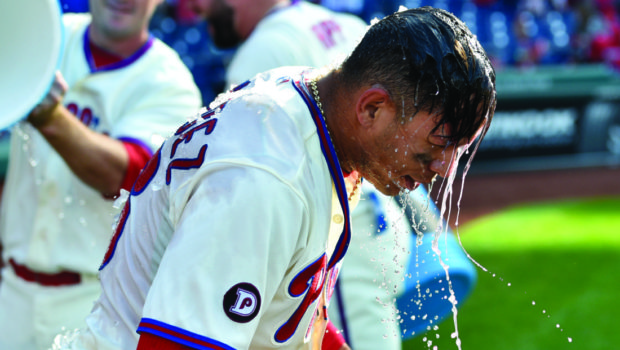 Now is the time to hail Cesar.

And then to soak him (above)!

Cesar Hernandez scored Daniel Nava in the ninth inning yesterday with a two-out, walk-off, broken-bat single to give the Phillies a 4-3 victory.

Walking Nava forced Nationals reliever Koda Glover to work with runners on base for the rest of the inning. A Freddy Galvis single two batters later sent Nava to third and Hernandez to the plate with a fifth-inning RBI single already under his belt.

Hernandez stayed with a 1-1 slider from Glover that hung over the middle of the strike zone, snapping his bat and flicking the pitch the opposite way onto the left-field grass for a game-winning single, earning himself a red Gatorade bath courtesy of catcher Cameron Rupp.

“To win two out of three from what I think is one of the better teams in the National League is really special,” Phillies manager Pete Mackanin said of his club, which had won just one of its past 12 games against the Nationals entering the series.

The Phillies nearly climbed back from a seven-run deficit Friday, falling a run shy in a 7-6 loss. And the team bounced back Saturday with a historic 12-run first inning.

“We were competitive in all three games, that’s all I can ask for,” Mackanin said. “That’s a tough ball club, and we beat them two out of three and almost swept. That’s huge.”

It was just the Phillies’ second series win over the Nationals in their past seven tries, dating back to the beginning of the 2016 season.

“I liked the game today, because the game is tight, so we wanted to fight,” Hernandez said.

In the top of the ninth, The Phillies were one out away from sealing the series win when closer Jeanmar Gomez allowed a three-run homer to Ryan Zimmerman to tie the game at 3.

After blowing the lead, the mood in the dugout was determined.

“Everybody is family,” Hernandez said. “So everybody said, ‘Let’s go and fight.’ We were doing that almost the whole game, so why not do it now?”