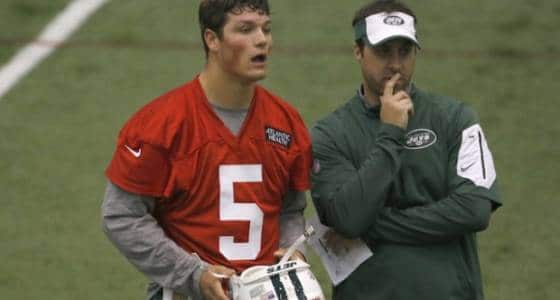 HACKING IT! LAST CHANCE FOR EX-NIT HACKENBERG WITH THE JETS!

Tonight’s preseason game at Detroit figures to be ex-Penn State Christian Hackenberg’s last chance to be the Jets’ starting QB.

It will be his last real chance to keep the coaches from giving Josh McCown the stamp of approval and to convince the organization to gamble on his youth and potential.

Everything points to McCown, the 15-year veteran, being the starter when the Jets open the regular season at Buffalo on Sept. 10. He has been there, done that and can manage a game. He’s the safe pick.

Still, coach Todd Bowles and offensive coordinator John Morton have said they will wait to see what happens “over the next few weeks” before officially naming who will open against the Bills. They want to keep all three quarterbacks — McCown, Hackenberg and Bryce Petty — engaged for as long as possible.

“All we ask is that they get better at something every day,” Morton said.

It’s not uncommon for those starters not to play in the fourth and final preseason game. If they do, it tends to be barely more than a series. If that script holds true, it’s not unlikely Bowles could name his starting quarterback late next week, making this game Hackenberg’s moment of truth.

Hackenberg, the 2016 second-round pick from Penn State, was called “basically a rookie” earlier this week by Morton. But he didn’t hurt himself in the Jets’ 7-3 win over the Titans last week. Hackenberg was 18-for-25 for 127 yards with no interceptions. He looked the part. He had pocket presence. He completed 72 percent of his passes and had at least two perfect throws dropped. His 6-foot-4 frame commands the huddle, and he has a big arm capable of creating plenty of “wow” moments.

Hackenberg has the arm to beat you deep, but he must show some type of down-the-field accuracy against the Lions.

Morton and Bowles have praised Hackenberg for the way he has taken care of the ball during the preseason. That sounds nice, but if the Jets go with the second-year player with zero pro experience, they will have to expect a high turnover-to-touchdown ratio.

In order for that to be worthwhile, Hackenberg has to be the kind of quarterback who is a fiery infectious leader who can rally his team when it’s down. He must show he can make big plays when they need to be made and can succeed when the odds are against him. If Hackenberg can show signs of that Saturday against the Lions, then maybe he will have a chance to become the Jets’ starter on opening day.

This could be his last chance.