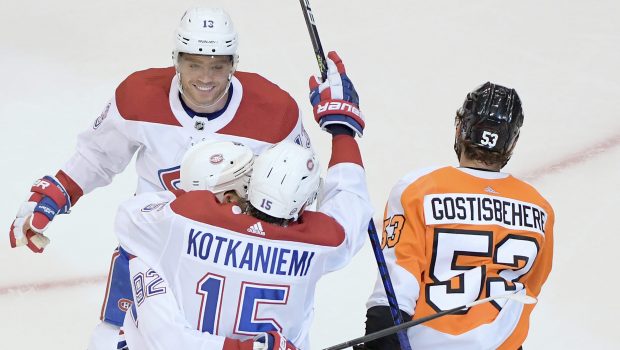 The Montreal Canadiens had just routed the Flyers, 5-0, and Kirk Muller finally checked his phone.

He found that coach Claude Julien was one of the first to send in his congratulations.

“To Claude, I’m sure he’s listening, this one was for you,” Muller said after the game.

On Wednesday night, after the Montreal Canadiens lost, 2-1, the Flyers in Game 1 of their first-round series of the playoffs, Julien began experiencing chest pains.

Julien, 60, was taken by ambulance to the hospital, where doctors placed a stent in a coronary artery. He is expected to make a full recovery.

Montreal’s Tomas Tatar and Jesperi Kotkaniemi scored two goals each and Carey Price got the shutout in yesterday’s afternoon start. The Flyers never recovered after Montreal’s first goal 1:02 into the first period. Down by 4-0 late in the second period, the Flyers lifted goaltender Carter Hart and replaced him with Brian Elliott. But the damage had been done.

Flyers Coach Alain Vigneault is close friends with Julien. The two were teammates in the minors in Salt Lake City in the early 1980s and coached against each other in the Stanley Cup Finals in 2011 when Vigneault coached the Vancouver Canucks and Julien was behind the bench with the Boston Bruins. Vigneault said he had planned to reach out to Julien.

How Montreal would respond to the scary turn of events was anyone’s guess. Hopes in Montreal had run high after the Canadiens shocked the Pittsburgh Penguins in the play-in round. By contrast, the team locked in on evening the series once they knew Julien’s surgery was successful

“We have a focused group,” Muller said. “I think hearing the good news about Claude’s health was a nice relief for everybody.”

Muller did not display any reluctance at his Friday morning briefing as he took the reins of one of Canada’s most iconic franchises. Smiling throughout the 15-minute session, he said he had spoken to Julien Thursday night, mostly about hockey. He said Julien was “fired up” about the game.

Although Muller has never been a head coach in Montreal, he knows the team well. He was a leader there as a player on the 1993 Stanley Cup-winning team, Montreal’s last. This is his second stint as an assistant coach in Montreal after serving as head coach for the Carolina Hurricanes from 2011-2014, where he posted a .500 record.

In the club’s public statement about Julien’s status, General Manager Marc Bergevin addressed the fact that Muller does not speak French, while Julien is fluent in both English and French. An unwritten rule with the Canadiens is that a head coach must speak French so he can communicate with the French news media and the population of Quebec, where French is the mother tongue of almost 80 percent of residents.