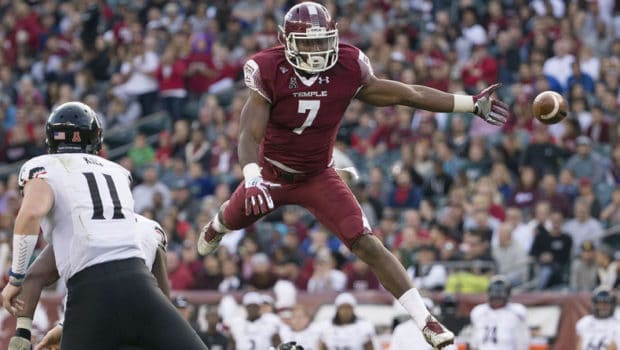 Haason Reddick had a feeling he was going to Arizona.

“After the visit I had, talking to coach B.A. (Bruce Arians), the love that was shown was so genuine,” Reddick told the Associated Press last night. “It felt like I wanted to be there.”

Reddick was selected by the Cardinals with the No. 13 overall pick on, completing a rapid rise to the top half of the first round for the Temple linebacker. He goes to a team whose coach has Temple roots: Arians coached the Owls from 1983-88.

Reddick got a rousing ovation from the crowd in Philly. He grew up across the bridge in Camden, New Jersey and played college ball at the Linc.

“It meant a lot, especially to hear the uproar from the crowd when my name was called,” Reddick said. “That was beautiful. I didn’t know that it was gonna be that loud. It was way louder than I expected. For all of this to happen in Philadelphia, it was great.”

Reddick was a walk-on at Temple after injuries in high school left him with no scholarship offers. He began his college career as a defensive back and was a starter as a junior before he was on scholarship. Last season, playing defensive end for the Owls, he led the nation in tackles for loss.

Still, he was only a possible first-round pick until stellar performances at the Senior Bowl and combine caught everyone’s attention.

He became just the fourth player in Temple history selected in the first round. The last was Muhammad Wilkerson, chosen by the New York Jets at No. 30 in 2011.