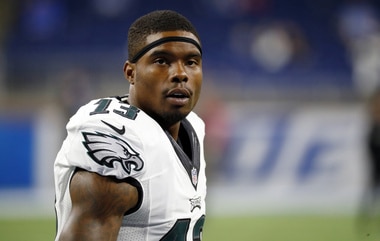 Josh Huff will play for the Eagles this Sunday against the Giants, even though he was arrested yesterday charged with unlawful possession of a weapon and marijuana after being pulled over for speeding on the Walt Whitman Bridge.

Huff will be at practice today.

“He and I spoke privately about it,” Pederson said. “I talk all the time with players that you want to eliminate distractions — he understands.”

Pederson also said he would not be punishing Huff.

As for punishment from the NFL, Pederson agreed there is a possibility that could happen.

Huff is the third Eagles player to find himself in legal trouble under Pederson’s watch. None have been punished by the team.

“It’s like your the father of your house. You have to keep talking to your kids. Keep reiterating who you represent. The Philadelphia Eagles,” Pederson said. “You have to make smart choices. If you make bad choices, you have to suffer consequences.”

As for the choices his players are making, Pederson said he was disappointed, but viewed it as a situation where it was out of his control.