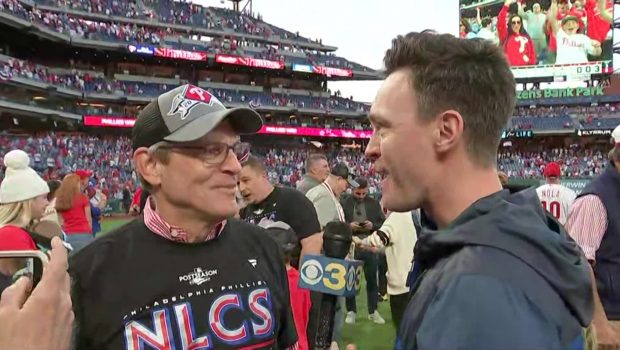 THANKS, JOHN MIDDLETON: ‘STUPID MONEY’ MADE PHILS A CONTENDER!

It has taken the national media a long time to come around to this reality:

THE PHILLIES ARE A LEGITIMATE CONTENDER!

Especially when it’s been 11 years since the Phils were last in the playoffs, and 1w2 since they last made the NLCS.

Bryce Harper and JT Realmuto and Zack Wheeler and even Nick Castellanos got the big bu cks, and they are paying off.

As the New York Times Tyler Kepner, who hails from Philly, explains:

“The promise of a day like Tuesday is why John Middleton — who sold his family’s tobacco business for nearly $3 billion in 2007 — authorized $527 million in free-agent contracts for the three stars of Game 1.

“Most of that investment went to Harper, whose arrival in March 2019 signaled the return of the Phillies as a team that was serious about winning.

“The desire to do something special, to do something great, is a passion,” Middleton said in his box at spring training, in Clearwater, Fla., shortly after signing Harper for 13 years and $330 million.

“When a fan vows to spend stupid money — shorthand for Middleton’s public vow to act aggressively and “maybe be a little bit stupid” in free agency after the Phillies’ sixth losing season in a row, in 2018 — the decisions are not always prudent.

“The Phillies chased some folks with strong track records, like the former pitcher Jake Arrieta and the former manager Joe Girardi, who were not the best fits for the future.”