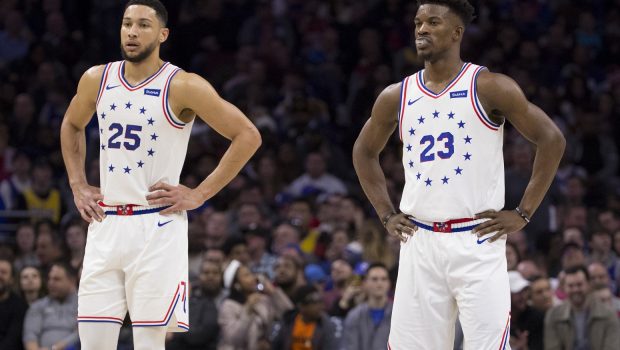 Sixers fans may have an intense interest in the Heat-Hawks series.

First because if the Sixers knock off the Raps — and Philly is up 2-0 — they will play the Miami-Atlanta winner next.

And second because Jimmy Butler is going off.

Which makes me wonder why Philly let Butler walk in the summer of 2019 and kept the overpaid, overrated Ben Simmons.

Butler scored a playoff career-high 45 points, including a personal 7-0 run down the stretch to decide the game, and the Heat held off the Atlanta Hawks 115-105 in Game 2 of their Eastern Conference first-round series.

“We go as he goes,” Heat guard Gabe Vincent said.

Butler’s decision to leave the Sixers as a free agent in the summer of 2019 reportedly stemmed in part from his assessment of Simmons’ mentality during their time together as teammates.

Per The Athletic’s Zach Harper, Butler “didn’t view [Simmons] on par with someone like himself or [Joel] Embiid when it came to mental makeup.”

Harper noted Butler also “didn’t like the hierarchy” of the Sixers organization.

In the past, Butler has denied that he wanted to leave Philly because of any issues with Embiid or Simmons.