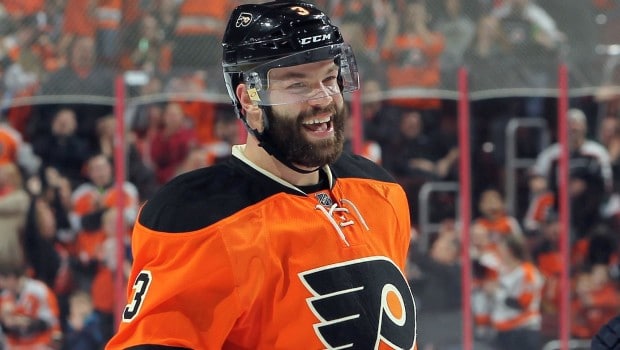 Flyers defenseman Radko Gudas is best-known for his bully-boy tactics and his penalties.

But yesterday he broke out of a 66-game scoring slump and it helped the Flyers to a 6-0 victory against the Columbus Blue Jackets at the Wells.

“It’s something I’ve never done before, so it’s a great feeling,” Gudas said.

Gudas and Tyson Barrie of the Colorado Avalanche on Jan. 4 are the only NHL defensemen with a two-goal, two-assist game this season.

“I asked him earlier this week if he had scored yet and he said ‘no’ and sort of put his head down,” Philadelphia forward Nick Cousins said. “He played one [heck] of a game back there.”

Flyers goalie Steve Mason, in his first start since Feb. 20, made 19 saves for his fourth shutout of the season. Michael Raffl had a goal and an assist, Sam Gagner and Claude Giroux scored late in the second period, and Cousins had a goal for Philly (30-23-11).

The Flyers are three points behind the Pittsburgh Penguins for the second wild card into the Stanley Cup Playoffs from the Eastern Conference. The Penguins lost 4-2 to the Calgary Flames on Saturday.

“For us, we need to play every game like it’s our last game,” said Gudas, who had one multipoint performance (two assists vs. Pittsburgh on March 22, 2014) in his first 183 NHL games. “And every game is a must-win for us. It helps if Pittsburgh loses, but for us, it doesn’t change a thing. We still have to go out there and play a full 60 minutes.”

Curtis McElhinney made 30 saves for Columbus (27-31-8), which was playing the second game of a back-to-back. They defeated the Edmonton Oilers 6-3 at Nationwide Arena on Friday.

“We did not have a good game — anybody,” Blue Jackets coach John Tortorella said. “So we’re not going to look at the tape. I already told [assistant Brad Larsen] and the other coaches, throw it away. We’re leaving it alone tomorrow. We’ll have our practice and we’ll get ready for Detroit [on Tuesday].”

Gudas set up Raffl’s goal at 3:40 of the first period, then his shot from the red line got past McElhinney at 11:45 of the first to end his long goal drought.

“I’m not going to say I was expecting it to go in, but I’m glad it did,” Gudas said. “Was a great feeling.”

The Flyers pushed the lead to 4-0 with goals by Gagner and Giroux 10 seconds apart late in the second. It’s the first time the Flyers have scored two goals in 10 seconds since Kimmo Timonen and Wayne Simmonds on April 13, 2014, according to the Elias Sports Bureau.

Cousins’ goal made it 5-0 at 10:03 of the third period. Initially waved off, video review showed that his stuff attempt from the post got under McElhinney and across the goal line.

Gudas closed the scoring at 10:29 of the third when his shot from the right point hit off McElhinney, bounced off the skate of Blue Jackets defenseman Ryan Murray and into the net.

Mason said he was happy another goalie got to feel the sting of Gudas’ shot.

“It’s a wonder he hasn’t scored yet,” Mason said. “He’s got the hardest shot I’ve ever faced. [Michal Neuvirth] and I have asked him to take a little off his shots in practice because it hurts when it hits you. … Heavy, fast, hard [shot]. It just hits you with a thud. That’s why we’ve asked him to take a little off in practice, because he can break your hand pretty easy.”

The Blue Jackets struggled to create offense all game. They had one shot for a 15:43 span in the first period and didn’t get their first shot of the second until there was 8:14 left.

“We didn’t establish a forecheck at all,” Tortorella said. “The first couple of shifts [of the game] I thought we played well. To create some sort of offense, we needed to get it through the neutral zone and we struggled with that. Didn’t create enough forecheck.”

The Flyers are 4-1-0 on their six-game homestand, which will end Monday against the Tampa Bay Lightning. Entering the homestand, the Flyers thought they’d need at least 10 points to have a realistic shot at a playoff spot, and a win Monday would give them that amount.

“We’re all aware of what the situation is,” Mason said. “… Nice to see the Penguins lost and gain a little ground here. You put it behind you and get ready for the next one because the next one is going to be a tough one.”