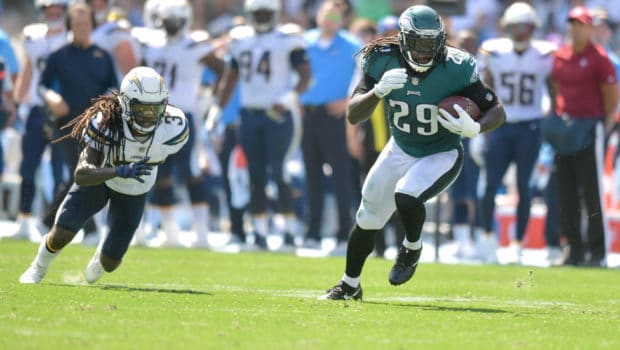 THE GROUND GOSPEL ACCORDING TO EAGLES’ LEGARRETTE BLOUNT!

Those who best know Eagles’ running back LeGarrette Blount best have said they’re not surprised by his primo performance for the Birds this season:

“I just think you hear about past situations, there’s always more that goes into than what you hear,” defensive end Chris Long, a teammate of Blount’s last year with the Super Bowl champion New England Patriots, told FanRag’s Geoff Mosher. “It’s a two-way street. I think often times as a player he gets dumped on, and he’s actually a pretty good dude.

Many of the Eagles haven’t played in the postseason or felt the pressure of having the NFL’s best record.

“Just be consistent, grind and do everything that we’ve done that got us here, plus more. Obviously it’s tough to go 15-1 in this league. But we’re a great team and I think we’ve got a chance to win a lot more games.”

Blount, who turns 31 next month, admitted that surviving nine years in the NFL has opened his eyes and given him more perspective than when he first entered the league as an undrafted free agent.

“It comes with growing up in the league and starting to become a professional,” he said. “Over the course of time I think I’ve become professional and I’ve learned a lot things that that you can’t… you have no control over.

“You’re a player. There’s a lot of things you have no control over. You just got make sure that you do everything you can, control what you control and everything will work itself out.”

He was a free agent until mid-May, when the Eagles signed him to a one-year deal for the league minimum.

“Honestly, I feel like he’s really misunderstood,” right tackle Lane Johnson said. “Maybe he didn’t gel with some of those guys in different locker rooms, but I feel like we are different in that concern.”

Blount’s one-year deal came with incentives that, with each passing week, become harder for him to reach.

Week 2 presented the first opportunity to see how Blount would react to limited snaps. He didn’t get a single carry and played only six snaps against the Chiefs.

Not according to Eagle running back Kenjon Barner, another Oregon product who played with Blount for two seasons in Eugene.

“That’s because people don’t know LeGarrette,” Barner said. “Things that have been said about him… he’s done some things, obviously, but that’s not who LeGarrette is. LeGarrette is a great dude. He’s a great teammate. He’s always in support of everybody in the room. He’s been Jay’s biggest supporter.”