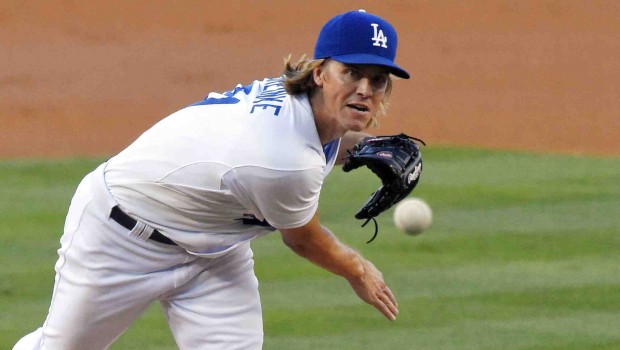 GREINKE HURLS BLANKS AT PHILLIES: ON TRACK FOR 109 LOSSES!

This is getting monotonous.

A night after the Los Angeles Dodgers’ Clayton Kershaw pitched a shutout, Zack Greinke allowed one hit and struck out eight in eight scoreless innings in beating the hapless Phillies 6-0.

“Well, that’s an easy one to talk about,” Phillies interim manager Pete Mackanin told MLB.com afterward. “It was all Greinke. He’s the whole package. He’s more impressive than the guy last night. He had all his pitches working for him. He had command, location and velocity and he makes it look easy at times.

“There’s plenty of good pitchers in the league. He’s right at the top of my list.”

It was the 10th time this season the Phillies have been shut out, second in baseball only to the Padres (13). The loss dropped the Phillies to 29-59, which puts them on pace for 109 losses. It would be their most losses since the 1942, when they dropped 109 games.

The Phillies suffered back-to-back shutouts June 14-15 against the Pirates and Orioles. Between then and Wednesday and Thursday they actually swung the bats pretty well, averaging 4.86 runs per game in a 21-game stretch, which ranked eighth in baseball.

“I think what’s frustrating about Greinke is I think a lot of hitters, they see it good,” Phillies left field Cody Asche said. “And then when you go to swing it just moves off your barrel. That’s what makes him tough. I think he knows that, too. He kind of feeds off the hitters, off their aggression. I think he’s good at reading hitters and feeding off it. If you’re trying to see some pitches, if you’re trying to be aggressive, he kind of knows how to attack you.”

Phillies right-hander Severino Gonzalez replaced Kevin Correia in the rotation for the series finale. He allowed five hits, four runs, two walks and one home run in 5 2/3, which was the longest start of his seven-start career.

He retired eight of the first nine batters he faced, but he allowed four runs in his final 2 2/3 innings. Entering Thursday, Gonzalez held opponents to a .591 OPS his first time through the lineup. But hitters posted a 1.343 OPS against him the second time through.

It almost didn’t matter against Greinke. He would have needed to throw a perfect game.

“We hope that we can catch somebody at a bad time and continue to swing the way we did before we faced these last two guys,” Mackanin said. “We got Bum (Giants ace Madison Bumgarner) tomorrow. That’s another pretty good pitcher.”