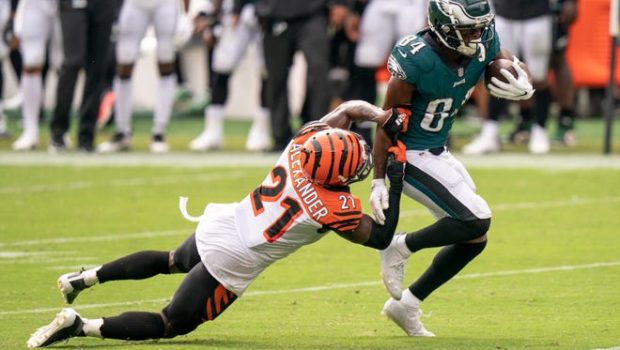 GREG WARD WAS THE ONLY EAGLES WR HEALTHY ENOUGH TO PRACTICE!

Just three games into this season, the Eagles top three wide receivers are either out or possibly unable to play Sunday against the San Francisco 49ers.

The Eagles placed rookie Jalen Reagor on injured reserve Wednesday. Alshon Jeffery is still working back after having foot surgery last December. And DeSean Jackson, who left the game Sunday with a hamstring injury, did not practice Wednesday and is listed as day-to-day.

That’s in addition to tight end Dallas Goedert, who was placed on IR on Tuesday with a broken ankle.

It got even worse on yesterday as J.J. Arcega-Whiteside and rookie John Hightower also missed practice for unknown reasons.

That left Greg Ward as the only wide receiver on the current 53-man roster practicing yesterday.

The others were practice squad players Deontay Burnett, Travis Fulgham and Marcus Green. Rookie Quez Watkins, who’s on injured reserve, is practicing this week. He’ll likely be added to the roster in the next day or so.

Last season, the Eagles won their final four games with a depleted wide receiver corps. That’s why quarterback Carson Wentz said he is used to the feeling by now.