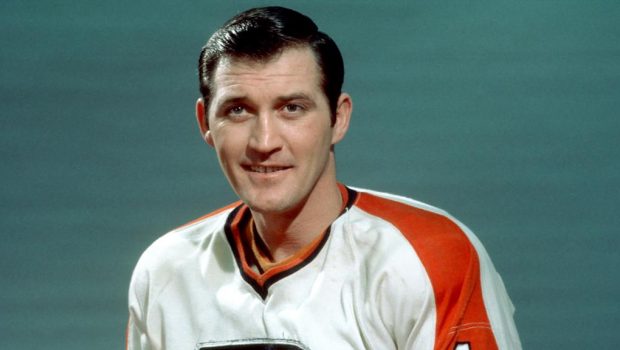 GREATEST FLYERS D-MAN OF ALL-TIME? HOW ABOUT BARRY ASHBEE

Ashbee had a different journey through his NHL career than other names on this list.

He did not become a mainstay in the league until he was 31 years old, and his time in the league was only a few seasons. He did not post fantastic numbers while representing the Flyers either. What made him a standout was his determination for hard work, and not stopping that hard work for any reason. He was someone who scratched and clawed his way in order to get the opportunities he was given. He was handed nothing. His mindset was that if you were not succeeding, then you need to work even harder.

Having this kind of mindset can be infectious in a locker room. Fellow teammates see the work ethic put into improving his game, and other players want to try just as hard. It is motivating and can bring an entire team-up. Ashbee helped set up the mental attributes of the locker room at the time.

He played during the “Broad Street Bullies” era like a few other names on this list as well. This was a rough-and-tough era for the Flyers team. They played a harder-hitting, more aggressive style of play than other teams did.

Ashbee was a perfect puzzle piece for this kind of hockey. He was good at dishing out hard checks and had a gritty, rugged mentality against his opponents. His teammates appreciated everything that he did on the ice. Unfortunately, though, he would be forced to retire due to getting hit in the eye with a puck. The Flyers still wanted Ashbee around, and he took an assistant coaching role as a result.

Ashbee was diagnosed with leukemia in 1977 and passed away shortly after. His jersey was retired by the team that same year. The Flyers also created the Barry Ashbee Trophy, which honors the best defenseman for the team for each season. Radko Gudas was the winner of the award in 2018-19.