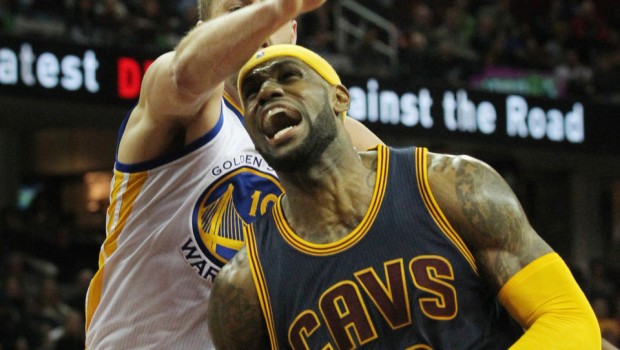 WHY THE GREAT LEBRON JAMES ISN’T ENOUGH FOR THE CAVS

How many times have you heard a coach say:

There is no I in team?

In other words, individuals don’t win games or championships — teams do.

Cleveland Cavaliers star LeBron James has done so much in the NBA Finals — 36.6 points, 12.5 rebounds, 8.8 assists, 45.6 minutes per game — and it’s still not enough against the Golden State Warriors.

James recorded his second triple-double of the 2015 Finals and his sixth career Finals triple-double with 40 points, 14 rebounds and 11 assists, but the Cavaliers still came up short, dropping Game 5 104-91 on Sunday as the Warriors took a 3-2 series lead.

What more can one player do to help the Cavaliers? The realistic answer is that it seems impossible that James can do any more. He disagrees.

“I don’t put a ceiling on what I’m capable of doing,” James said in one sentence.

And in the next sentence, he said, “I know I’m shouldering a lot of the burden, but it is what it is.”

Shouldering the burden is an understatement, and he’s been so dominant there is a growing discussion that James is a Finals MVP possibility even if Golden State wins the title. That would make him the second player in NBA history (Jerry West in 1969) to lose in the Finals but win MVP.

With injured Kyrie Irving and Kevin Love sidelined, James is scoring, rebounding, passing, defending, setting up the offense and organizing the defense, maybe even washing the uniforms and loading the plane.

“I know he’s going to come at us,” Warriors coach Steve Kerr said. “I wonder how to stop him. But he’s going to attack. He’s going to have the ball in his hands almost every play, particularly with Kyrie out, and that’s the trick, right? How do you slow him down? How do you keep him from dominating the game? Scoring himself or finding three‑point shooters? And there is a balance in there somewhere that we’re trying to find, and it’s pretty hard.”

In the first half, Cleveland scored 17 baskets — James made eight of them and assisted on eight (seven of them three-pointers), having a direct impact on 43 of the Cavs’ 50 first-half points through field goals and assists.

That he’s doing so much and down in the series exemplifies how much they’re missing and how little they have after James. That Cleveland has even made this a minimum six-game series with a depleted roster is an accomplishment.

When a team’s eighth and ninth players are elevated to major roles and significant minutes, a healthy, deeper, more talented opponent can take advantage and that’s what Golden State has done as the series unfolded.

“I want to do whatever it takes to help our team win, and I haven’t been able to do that the last two,” James said. “So hopefully I can do a better job coming in on Tuesday. We all, as a unit, can do a better job, and we’ll be fine.”