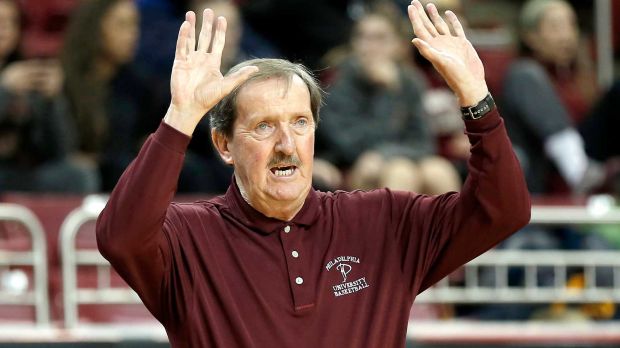 IT WAS A GRAND DAY FOR PHILLY LEGEND HERB MAGEE

It was a grand day for Herb Magee.

Magee became the second men’s coach in NCAA history to win 1,000 games with Philadelphia University’s 80-60 win over Post on Saturday. He has won all 1,000 games over 48 seasons at the 3,600-student private Division II university in Philadelphia.

Duke coach Mike Krzyzewski is the only other NCAA men’s coach to win 1,000 games. Krzyzewski won his 1,000th game on Jan. 25 against St. John’s at Madison Square Garden.

“Relief. I don’t make that up,” Magee said. “That’s the way I felt. Ask my wife, she’ll tell you. It’s been a tough situation because the hype is there and everyone is pulling for us as a team but they’re really pulling for me to get 1,000 wins because they know how important it is. It means a lot.”

“We all admire him. Herb has had numerous opportunities to change locations and get a bigger job. But he always seemed to be comfortable at Philadelphia University,” Dunphy said. “The rest of us are insecure looking for the next job. Herb has always known who he was and what he was supposed to do.”

The 73-year-old Magee coached Saturday at the tiny campus court at the Gallagher Center that only holds about 1,200 fans on a few rows of bleachers. Former Pennsylvania governor Ed Rendell and Phillies executive Dave Montgomery were at the game. Two sets of students painted their chests “#MAGEE1K!,” the other “HERB.”

Magee has earned all of his victories at Philly U and has become a local hoops icon and a Naismith Hall of Fame coach. He set the school’s scoring record (then known as Philadelphia Textile), bypassed a shot with the Boston Celtics to take a job at the school as an assistant, then became head coach in 1967.

“It’s my school,” Magee said. “They gave me an opportunity to play here and they created a position for me to be an assistant coach. I have had no desire to ever leave.”

He led the program to a national championship in 1970.