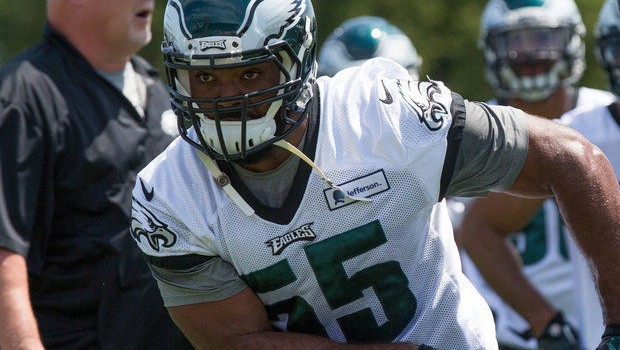 EAGLE GRAHAM SETS HIS SACK BAR HIGH: ‘MY GOAL IS TWO PER GAME!’

By Harry Allisohis pick just to get on the field.

But that was during Andy Reid’s last few years as Eagles coach, when the Birds played a 4-3 D and Graham suffered a horrible ACL injury.

But now that the Eagles are playing a 3-4 and Graham has solidified his position as a key linebacker with a nice, new contract:

“Double digits,” Graham said when asked if he had a number of sacks he was shooting for in his first season as a starter.

After being asked to elaborate, Graham set the bar for his season even higher.

Michael Strahan holds NFL’s single-season sack record with 22.5 back in 2001. Graham aspires to reign in ten more this season.

“This is how I’m thinking about it … Out of 70 plays per game, why not? Why not two per game? I don’t care how they come. As long as they come.”

With Cole departing for Indianapolis via free agency, Graham is stepping into a full-time role for the first time since the Eagles made him their first-round pick in 2010 over the likes of Jason Pierre-Paul and Earl Thomas.

“I try not to think about the critics too much,” Graham said. “But you know that’s always on my mind. I want to shut people up all the time. I know what I can do and I just want to go out there and do it on every snap.”