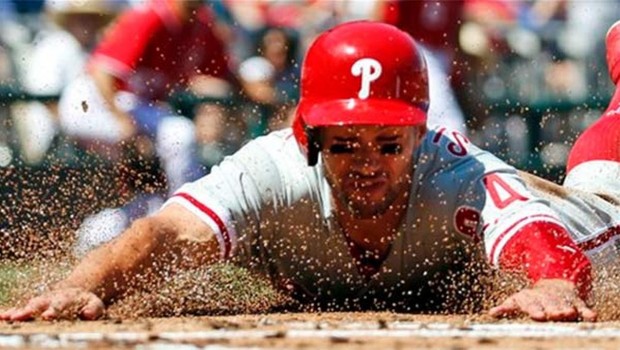 Although the conventional wisdom — which is rarely right — is that when Domonic Brown and Cody Asche come back from Triple A Lehigh Valley Sizemore will once again be a sub.

Until then, the 32-year-old left fielder is in his 12th major league season after a career in Cleveland and Boston, and he is making the best of the situation and the Phillies are prospering.

He came into Saturday’s game hitting just .238 on the season but was 5-for-15 in his previous five games. Already swinging a hot bat, Sizemore turned that 5-for-15 into a 9-for-20 streak Saturday with a 4-for-5 performance in the Phillies’ 7-5 win, in which the lefty singled three times, doubled once and scored a run.

Sizemore, who hasn’t hit particularly well since his return to baseball in 2013, said that this steady stream of at-bats is what has triggered his offensive prowess.

“It felt good to have some good swings and get the win,” Sizemore said. “I felt like I didn’t have a lot of at-bats or a lot of consistent at-bats, so I try to just do what you can to stay sharp and relax up there and keep grinding it out.”

“Grady just seems to be clicking right now,” Sandberg said. “He gave us some real good pinch-hits, he got some hits and I think that got him rolling. Now with some starts, he seems to be in a groove. He’s just seeing the ball real good, squaring it up.”

“You can’t really worry about what you can’t control,” Sizemore said. “There’s no need for motivation for any player. You want to go out there and get better every day. So you just focus on what you can control and go from there.”

As one of the veterans of the clubhouse, Sizemore said he knows how to look past both the struggles that have happened and the adversities that may be coming.

“You look for the positive and you work off of that,” Sizemore said. “We had some tough breaks and obviously we weren’t playing very well, but you know it’s going to turn around. You just keep doing what your routine is, whatever that works and you make adjustments every day and you work from there.”