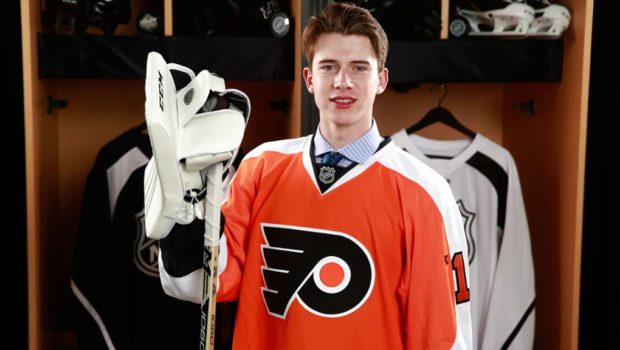 GOTTA’ HAVE HART! FLYERS’ FUTURE GOALIE IS ALL TEED UP!

Carson Hart is looking more and more like the Flyers’ future goalie.

His biggest competition, Felix Sandstrom, signed a one-year extension with Brynäs, his club in Sweden where he was a teammate with Oskar Lindblom.

In signing Brian Elliott to play with Michal Neuvirth, the Flyers are likely set for the fall. Hart would have to blow the doors off in training camp to get a shot at making the NHL.

Even then, general manager Ron Hextall would probably send Hart back to the WHL for one more year. He certainly had no problem with Sandstrom staying overseas for one more season.

“I was fine with it,” Hextall said recently. “The Swedish Elite League is a terrific league. It’s a very good development league. I had no issue with it.”

Staying one more year may not hurt him if he’s racing against Hart and Hart has a small chance of going pro this fall.

And even though the Flyers took another goalie, Kirill Ustimenko, in the third round of this year’s draft, the top two contenders really aren’t threatened.

“Again, the goaltender dictates the split in the games to some degree,” Hextall said. “You don’t want to play them back-to-back but obviously if a guy is going, you do. I always call it a tandem. I feel like when I played, my partner, it was a tandem. I might play more or he might play more. It’s a tandem.”