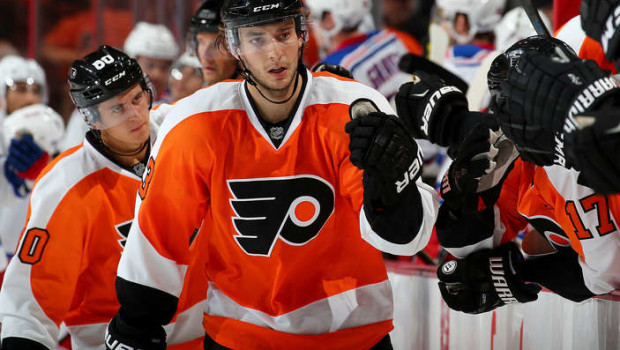 The new-look Flyers gave their fans something to cheer about in last night’s home-opening exhibition game at the Wells.

Yevgeni Medvedev opened the scoring at 8:43 of the first period on the power play. It was the 33-year-old defenseman’s first goal in the NHL after signing with the Flyers as a free agent from the Kontinental Hockey League on May 20.

Brayden Schenn gave the Flyers a 2-0 lead at 3:56 of the second period with a power-play goal.

After the Rangers got goals from center Oscar Lindberg and defenseman Mat Bodie 1:17 apart to tie it 2-2, Sam Gagner, acquired from the Arizona Coyotes in a trade at the 2015 NHL Draft, scored a power-play goal at 9:40 of the second to put the Flyers back on top for good.

Gostisbehere scored at 2:11 of the third period at even strength and again at 16:29 on the power play.

Bodie, who played with Gostisbehere at Union College, scored his second goal with 1:59 remaining to make it 5-3.

New York goalie Magnus Hellberg made nine saves on 11 shots in 28:27 before being replaced by Antti Raanta, who allowed three goals on 17 shots.

Neither team scored in five minutes of play under the new 3-on-3 overtime format after the game ended.