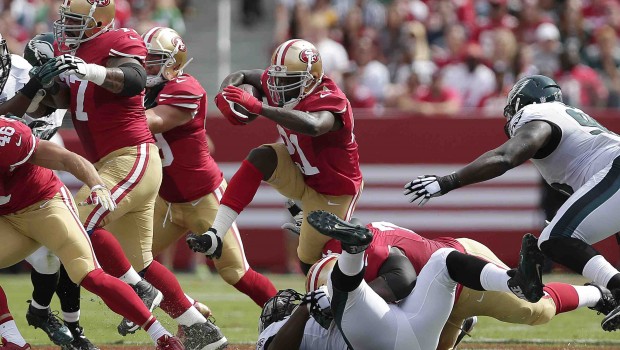 GORE NOT COMING TO EAGLES: COLD FEET OR A BETTER DEAL?

A week ago Niners running back Frank Gore exclaimed:

But now he has developed a case of (pardon the cliche) cold feet on joining the Eagles, a source told ESPN NFL Insider Adam Schefter, confirming an earlier report by NFL Network.

Sources told ESPN on Sunday that Gore intended to sign in Philly on an expected three-year, $7.5 million deal.

According to a source, the Indianapolis Colts have also expressed interest in Gore, who has played the entirety of his 10-year career with the San Francisco 49ers.

The reversal leaves the Eagles in search of a running back after already agreeing to trade LeSean McCoy to the Buffalo Bills.

Gore is coming off four straight 1,000-yard rushing seasons and has rushed for over 1,000 yards in eight of the past nine seasons. The only season over the past nine in which he failed to reach that threshold was 2010, when he missed five games with a broken hip. Gore is considered an excellent pass protector as well.

A five-time Pro Bowler, Gore was a big proponent of Jim Harbaugh returning to the Niners, who instead “mutually” parted ways with the coach and promoted defensive line coach Jim Tomsula to the head-coach position. Gore said he wanted to see what the 49ers did with the job before deciding his own future.