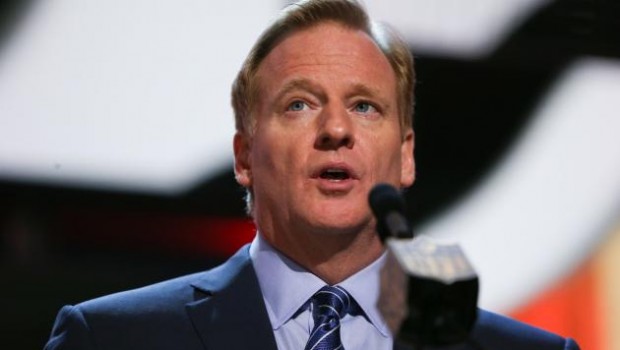 GOODELL (WITH STRAIGHT FACE): ‘WE PUT GAME AHEAD OF EVERYTHING’

NFL commish Roger Goodell had a press today in San Francisco and addressed Deflategate, but he uttered the words that ring hollow to fans and players alike:

“We put the game ahead of everything.”

The decision by the New England Patriots to accept their Deflategate punishments will have no bearing on quarterback Tom Brady’s pending appeal, Goodell said Wednesday at the conclusion of the NFL’s spring owners meetings.

“I admired the steps he took. We might disagree on things, but that is not unusual,” Goodell said.

But Brady’s appeal, filed last week by the NFL Players Association, remains on the docket as he hopes to have his four-game suspension reduced or lifted completely.

The union has formally requested that Goodell recuse himself from hearing Brady’s appeal, but Goodell said he has not yet decided if he will do so.

Yet he hardly sounded like a man who was prepared to step aside from the process.

Several times during the commissioner’s 23-minute news conference, he referenced the appeals process established in the collective bargaining agreement and said it is his duty to regulate issues that affect the integrity of the game.

Attorney Ted Wells noted in his investigation into Deflategate that Brady did not fully cooperate, failing to provide digital evidence, include text messages and e-mails, from his cell phone. Goodell reiterated Wednesday that Brady’s level of cooperation was a factor in the league’s decision to suspend him for four games.