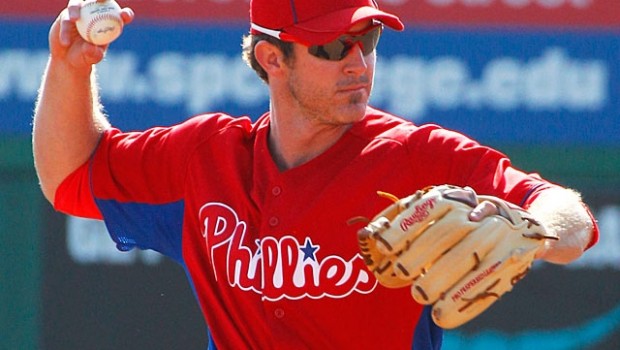 The Phillies’ second baseman wasn’t ready when spring training began last month because of an ankle injured in January.

He started slowly and then began hitting in games, first as a DH.

Utley took another step forward in the Phillies’ 6-3 loss to the Blue Jays at Bright House Field on Saturday, playing four innings at second base — his first defensive action all spring.

Utley only had to make one play, snagging a line drive by Jose Reyes to lead off the third inning, but he said after exiting the game that he felt good.

“It went well. Played four innings, didn’t have a whole lot of action, but it went well,” Utley said. “Just trying to get some defensive reps. Today was a good start.”

Utley isn’t sure what his schedule looks like the rest of the way. With more than two weeks to get ready for opening day, the Phillies likely will gradually increase the number of innings he plays at second per game.

“I don’t necessarily see playing every single day from here on out, but trying to just, take baby steps in a smart way,” Utley said.

“Good to see him out on the field,” Phillies manager Ryne Sandberg added. “That’s a step in the right direction as far as him saying that he’s ready to play the field.”

Utley, who sprained his right ankle in January, seems to have no issues running the bases. He ran hard from second base, turned the corner at third and slid home safely in the fourth inning of Saturday’s game.