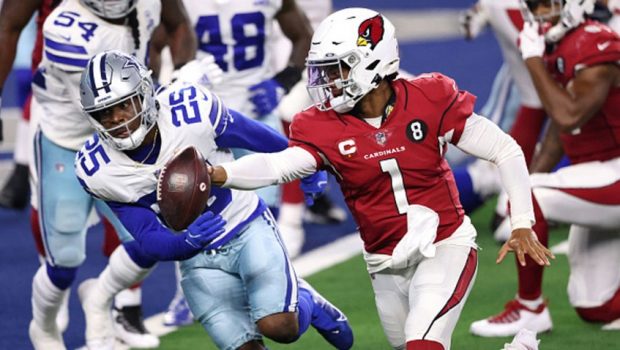 GOOD NEWS FOR EAGLES AND THEIR FANS: COWBOYS ARE WORSE!

Eagles fans are desperate for good news after Sunday’s soul-crushing loss to the Ravens at the Linc.

Well, they got some last night.

The Birds are still only a half-game out of first place in the NFC East behind the Cowboys, who were embarrassed at home, 38-10 to the Arizona Cardinals.

The Cowboys fell to 2-4 in Mike McCarthy’s debut season and 0-1 playing without quarterback Dak Prescott for the first time in five seasons. Kyler Murray, meanwhile, improved to 7-0 as a starter at AT&T Stadium as he added a professional victory to a series of college and high school wins at Jerry World.

Quarterback play wasn’t Dallas’ only big issue. But Andy Dalton was clearly not Dak Prescott, who averaged 371.2 passing yards per game and a 99.6 rating before suffering a season-ending compound fracture and dislocation of his ankle. Dalton completed 34 of 54 passes for 266 yards, but he failed to sustain drives, often wasn’t on the same page as his receivers and threw two costly interceptions, including one fourth-quarter pick by Cardinals safety Budda Baker.

The Cowboys needed more than 57 minutes to score a touchdown, a 1-yard pass from Dalton to Amari Cooper after the quarterback had thrown back-shoulder fades to Cooper and Michael Gallup on the series. Gallup also dropped an end zone pass from Dalton in the second quarter.

The anemic performance came after Dallas scored more than 31 points each of the previous four weeks. It didn’t help Dalton’s case that he was sacked three times and hit eight on a night when four-time All-Pro right guard Zack Martin exited with a concussion, leaving the veteran passer with four offensive linemen who had combined for one start before the 2020 season. Dallas’ offensive line has regressed from its best position group for much of the last decade to among its worst.