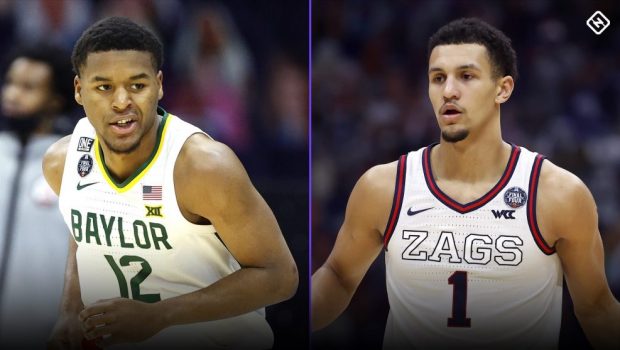 GONZAGA A 4 1/2-FAVE OVER BAYLOR FOR TITLE MONDAY NIGHT!

No. 1 Gonzaga will meet No. 2 Baylor in the 2021 NCAA men’s basketball national championship game tomorrow night.

Gonzaga (31-0) advanced to the championship game with a thrilling 93-90 overtime victory over No. 11 UCLA last night. Jalen Suggs’ buzzer-beating 3-pointer was the highlight, and the Bulldogs hope to carry that momentum into the championship game. Suggs, Drew Timme and Corey Kispert are All-America playmakers trying to cap that perfect season.

Baylor (27-2) won the South Region and advanced to the championship game with a 78-59 victory over No. 2 Houston in the Final Four. The Bears are in the national championship game for the first time since 1948. Baylor’s guard trio of Jared Butler, MaCio Teague and Davion Mitchell hit double figures against the Cougars.

Here’s everything to know about betting on Gonzaga vs. Baylor in the 2021 NCAA Tournament, including updated odds, trends and our prediction for the Final Four game.

The Bulldogs have been favored in every game and are 16-13-2 ATS this season. Gonzaga is 5-1 ATS against top-25 opponents and 4-1 ATS in this year’s tournament.

Baylor is 19-10 ATS this season, but this is its first game as an underdog. Baylor is 4-1 ATS in this year’s tournament.

Timme (19.0 ppg) has been a force throughout the tournament. He scored 25 points in the semifinal against UCLA. Kispert (18.9 ppg) and Suggs (14.0 ppg) form a dynamic backcourt. Joel Ayayi (11.8 ppg) and Andrew Nembhard (9.1 ppg) also hit double figures against the Bruins. The Bulldogs do not have a deep bench.

Gonzaga was supposed to win in a blowout and Baylor in a tight one in the Final Four. Those roles were reversed. Still, the Bulldogs did what UNLV and Kentucky couldn’t do in 1991 and 2015, respectively: reach the championship game.

The Bears can score with the Bulldogs, which should lead to a furious first half and a slim Gonzaga lead at intermission. Baylor has defended the 3-point ball well during the tournament, but the common thread in its two losses this season (Kansas, Oklahoma State) was an off shooting night. If the Bears are off, then Gonzaga will win in a blowout.

Mitchell will tie up Suggs, but Kispert and Timme will get the offense going in the second half. The Bulldogs hold off Baylor’s late charge with free throws, seal the perfect season and earn a national championship worth waiting for.