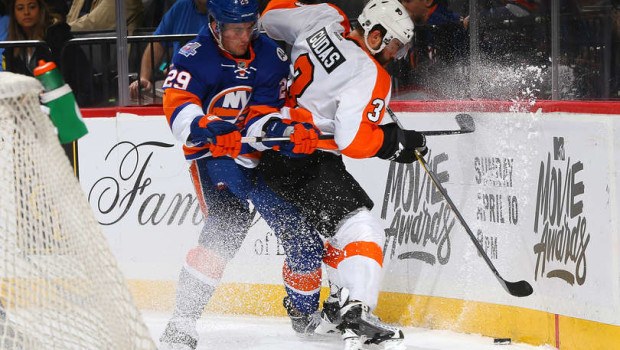 It took all 82 games for the New York Islanders to find out who they would face in the opening round of the Stanley Cup Playoffs.

With a 5-2 loss to the Flyers in their regular-season finale at Barclays Center on Sunday, the Islanders (45-27-10) will face the Florida Panthers as the first wild card from the Eastern Conference.

Shayne Gostisbehere, Evgeny Medvedev, Michael Raffl, Scott Laughton and R.J. Umberger scored for the Flyers (41-27-14), who clinched a playoff berth Saturday and will face the Washington Capitals in the first round as the second wild card from the East.

Michal Neuvirth made 14 saves in his first start since March 16.

“It was nice to get him in,” Flyers coach Dave Hakstol said. “He’s been ready to go for the last few days, so to be able to get him into the net and get a good 60 minutes of game action I think is as important as he prepares for next week as well.”

Gostisbehere cut the Islanders’ lead in half with a power-play goal 2:04 later. Shortly after minor-league call-up Ross Johnston was whistled for high sticking, Gostisbehere took a pass from Jakub Voracek and took a wrist shot from the point that found its way through a crowd in front and past Greiss to make it 2-1.

Philly capitalized on a two-man advantage in the final minute of the first period to tie the game. With Johnston and Bracken Kearns in the box, Medvedev one-timed Matt Read’s feed past Greiss to make it 2-2 with 7.1 seconds remaining.

The Flyers grabbed the lead for the first time when Raffl scored 6:38 into the second period. He skated into the slot and one-timed a pass from Laughton past Gibson to make it 3-2.

“It’s basically for nothing, so I think it was kind of a sloppy game at both ends,” Raffl said. “It is what it is. You’ve got to get through that one.”

Laughton made it 4-2 at 5:50 of the third period when he beat Gibson with a snap shot from the left circle. Umberger’s power-play goal with 8:50 remaining put the game out of reach. He played for the first time since Feb. 20.