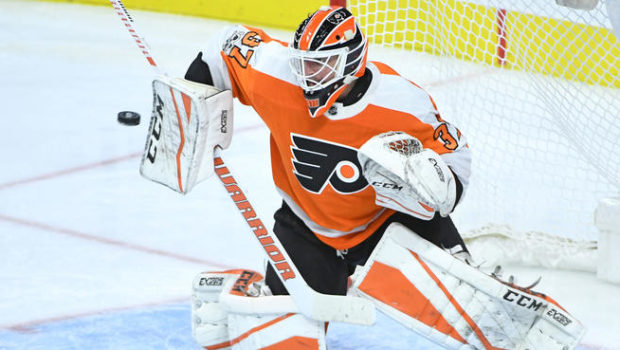 GOALIE BRIAN ELLIOTT HAS BEEN THE MAN IN FLYERS’ TURNAROUND!

Then they won five straight and are back in the fight for a playoff spot in the East.

So, who’s responsible for the turnaround?

Jakub Voracek has been brilliant, sitting second in league scoring over the past 18 days with one goal and 12 points in eight games.

Claude Giroux has been outstanding — two goals and 11 points.

Wayne Simmonds and Sean Couturier have also been producing, with six goals and 12 points between them.

And while those four Flyers forwards have been lifting the offense, Ivan Provorov, Shayne Gostisbehere, Andrew MacDonald and Robert Hagg have been helping drive the defense.

But more than anyone, it should be goaltender Brian Elliott who is earning praise for his role in returning the Flyers to playoff contention. Elliott, who has been named one of the league’s three stars of the week for two weeks running, has been the backbone of Philadelphia’s recent success, which is incredible considering there was a time last season when it appeared there were two things Elliott couldn’t catch: a puck or a break.

Acquired by the Flames in the summer ahead of the 2016-17 campaign, Elliott was a veteran netminder coming off of a stellar season with the St. Louis Blues and asked to come in and provide Calgary with the goaltending that eluded them since Miikka Kiprusoff’s heyday came to an end.

Unfortunately, through the first half of the season, over which time Elliott played about 20 games, his performance left much to be desired. He had an 8-10-1 record, an ugly .889 save percentage, inflated 2.95 goals-against average and even lost his starting spot to backup Chad Johnson for a time.

Thought to be the answer between the pipes, all Elliott had brought Calgary was more questions. But when the second half of the campaign commenced, Elliott was a different goaltender. While it wasn’t exactly an all-world run of play, he saw an improvement from mid-January to mid-February, posting a .908 SP over eight outings. And then came his run from mid-February onward, where Elliott was every bit the goaltender the Flames had expected. Over his final 21 outings, Elliott went an impressive 15-5-1 with a .927 SP, 2.17 GAA and two shutouts.

Flames faithful won’t remember Elliott fondly, however, because just as things started turning around, his tenure came to a catastrophic close. He played four games and took three losses against the Anaheim Ducks in the first round, across which he posted an .880 SP and 3.89 GAA which led to him basically being run out of town. He hit the free agent market, and that’s where Philadelphia scooped him up on a two-year, $5.5-million contract.

The early part of Elliott’s season played out in much the same way it had ended in Calgary, though. Across the first month of the season, he turned in a 5-2-1 record, .884 SP and 3.23 GAA. Philly’s successes seemed to come at times in spite of Elliott’s play. As October became November, though, it seemed something clicked in Elliott, and it should come as no surprise that his own personal turnaround came only shortly before the Flyers started to come back to life.

Since Nov. 1, Elliott has been among the best goaltenders in the league. In his past 19 games, 18 of which have been starts, he’s turned in a .923 SP and 2.43 GAA to go along with an 8-5-5 record. During the 10-game losing streak, he dropped only two of seven starts in regulation and still managed a .908 SP. His 5-on-5 over that time, too, was an incredible .942 — only six goaltenders were better. And that play during the worst of times has carried over to now, when things are going as great as they have all season for the Flyers. During the run of seven wins in eight games, all of which have seen Elliott earn the start, he has turned in a sparkling .931 SP and 1.98 GAA, with a .933 SP at 5-on-5, and Elliott kicked off the whole run with a dazzling 43-save performance against the Flames, of all teams.

Overall, Elliott’s numbers may not scream world-class. He’s not a Vezina Trophy candidate at the moment and may very well remain well outside contention when the campaign comes to a close. But only two goaltenders with 900 minutes or more at 5-on-5 have been better than Elliott and there’s no other netminder who has dug in when his team needed it this season quite like the man they call ‘Moose.’ And if the Flyers can turn this ship all the way around and reclaim what once appeared to be a lost season, it’s Elliott who should earn high praise for his play when the Flyers needed someone, anyone, to steer them in the right direction.

0 thoughts on “GOALIE BRIAN ELLIOTT HAS BEEN THE MAN IN FLYERS’ TURNAROUND!”