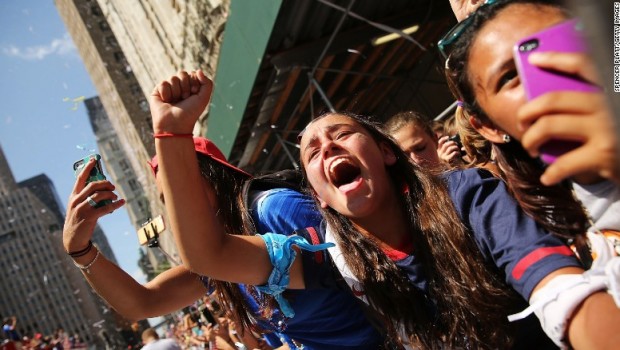 YOU GO GIRLS! WORLD CUP HEROES GET A WELL-DESERVED PARADE

It was quite a morning in lower Manhattan!

The U.S. Women’s World Cup champions were saluted Friday with a ticker tape parade along New York’s vaunted Canyon of Heroes, a historic and rare moment for female athletes. On a glorious July morning, the 23-member squad that defeated Japan 5-2 before a record-breaking U.S. television audience Sunday became the first women’s sports team bestowed with a parade along a stretch of Lower Manhattan where millions have cheered on soldiers, kings, astronauts, the Yankees and Giants.

“Being able to see something like this firsthand is something young girls can only dream of,” said Samantha Ruotsi, 20, who came from Buffalo, New York. “I am so proud to have grown up in a country with such strong women, and it’s an inspiration to be a part of this history.”

Indeed, the last time female athletes paraded along the Canyon of Heroes was in 1984, when gold medalists Mary Lou Retton and Cheryl Miller joined other U.S. medal winners — male and female — after the Summer Olympics in Los Angeles. “Women from sports that are dominated by men are finally getting the attention they need,” said Lauren Laning, 14, a New Jersey resident. “It’s inspiring to young girls.”

In 1960, the winner of the Olympic gold medal in figure skating, Carol Heiss, was feted with a ticker tape parade along the Canyon of Heroes. She was a local heroine who grew up in Queens.

There were also parades for Amelia Earhart in 1928, as the first woman to complete a trans-Atlantic flight, and a salute to the women in the armed services in 1951, according to the business improvement group for Lower Manhattan, the Downtown Alliance.

Floats carried the players — who were showered with tons of confetti made from paper scraps — from Battery Park to City Hall, where throngs celebrated their victory with a massive rally and Mayor Bill de Blasio presented each player with a key to the city.

De Blasio called members of the team heroines on and off the field, and an inspiration for women of all ages.

And the mayor reminded the crowd of the special occasion — the first women’s team honored with a ticker tape parade.