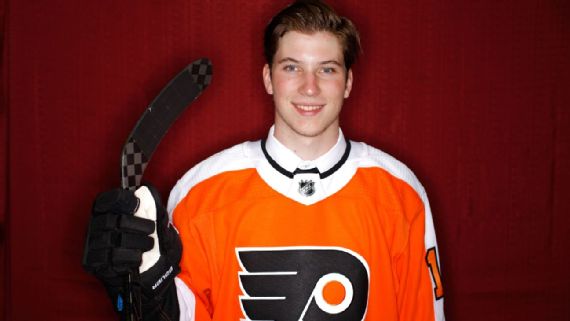 HERE WE GO AGAIN! FLYERS’ PROSPECTS ARE KEY TO A CUP!

Team overview: The Flyers don’t have as much game-breaking talent as the Coyotes do at the top of their system, but 2017 No. 2 overall pick Nolan Patrickis right up there; after Patrick, the Flyers have the cupboards lined with talent at every position. The group includes solid first-round picks, middle-round selections who have trended up, and an undrafted free agent in Philippe Myers who is one of the very best defense prospects in hockey. Not too long ago, the Flyers’ farm system was a laughingstock, with C-grade college free agents making it into their top five. Today, they are in the best position of any NHL team in terms of adding young premium players to their roster.

Prospects outside top 100, top 10 goalies: There is a lot to like about German Rubtsov, while at the same time acknowledging he didn’t have the greatest season due to injury and a lack of ice time in Russia, both of which hindered his development. From what we did see, he has the capability to be a very good two-way forward. He can make plays and be effective around the puck with speed and skill, coupled with good physical play and awareness at both ends of the rink.

Matthew Strome isn’t as good a prospect as his older brothers, Dylan and Ryan, were at the same age, but he remains a noteworthy prospect. He’s more of a pure goal scorer and less of a playmaker than his brothers, but the playmaking is more than competent. He has above-average stick skills and makes plays to his teammates at a high level. He’s strong for his age and uses his big frame well. Strome’s major issue is his skating; he’s very sluggish, which led to his falling so far in the draft.

Morgan Frost showed significant development last season as a 17-year-old. His hockey sense is what stands out. Frost is a great playmaker who is often a primary creator of scoring chances. While he’s great when he has the puck on his stick, he needs to improve away from the puck and is not a fierce competitor in puck battles. His top gear is fine, and he shows great agility and burst in his first few steps.

Beyond the top 10, Isaac Ratcliffe drew a lot of attention in the OHL as a towering forward who can score, due in part to a bullet of a wrist shot. He has decent offensive skills for a big man, creating scoring chances with his puck protection skills and winning battles around the net, but he can also make creative plays with the puck.

Netminder Anthony Stolarz is an incredible athlete for a 6-foot-6 goalie, and looks ready for his NHL shot. Robert Hagg is a decent two-way defenseman who improved his physical play this season. Samuel Morin is a tall defenseman with great physical play and good feet for his size, but is limited with the puck. Tanner Laczynski opened eyes as a smart two-way center for Ohio State this past season and for Team USA’s under-20 squad internationally. Taylor Leier is a do-it-all forward who can provide depth. Mike Vecchione has a fine skill level, is fantastic on faceoffs and can push play forward, but he can be taken out of a game with physical play.

Noteworthy prospect: Mikhail Vorobyov had a strong season as a 19-year-old, including centering Russia’s top line at the world juniors. He could be quicker but is not lacking in any other area. He’s a tall center with skilled hands and great vision, is one of the better playmakers in his age group, and shows good awareness away from the puck.

2017-18 impact: Patrick will likely be on the opening night roster as a middle-six forward right away. Myers, Sanheim and Lindblom could all compete for spots. The two defensemen might require some AHL time at first, but Lindblom could possibly break camp with the team. I could see any of those four making an impact if given a chance. Down the depth chart, Hagg, Morin, Leier, Vecchione and Stolarz could all play NHL games this upcoming season, though they won’t be as impactful.