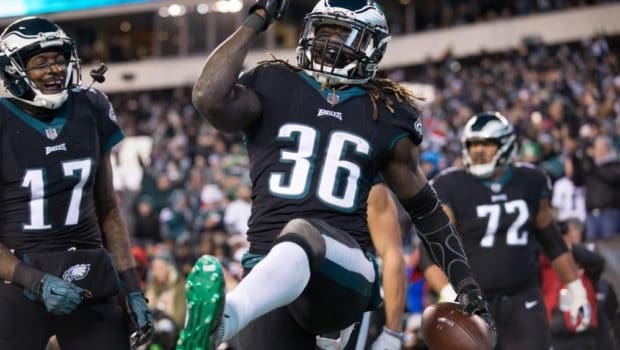 GIVE ME THAT ROCK, EAGLES’ WORKHORSE JAY AJAYI SAYS!

Eagles running back Jay Ajayi wants to be a workhorse when the Birds play next Saturday at the Linc in the divisional round of the playoffs:

“I’m excited to embrace the workhorse role if that’s what winds up happening this postseason,” Ajayi said after practice on yesterday. “Just being ready for it. It’s something I’ve never done before, I’m just getting my mind right for the next couple games to be physical.”

Quarterback Nick Foles isn’t Carson Wentz, which is a reason the Birds will run a lot. The three-headed monster of LeGarrette Blount, Corey Clement and Ajayi should have plenty of carries among them.

“If they want to run me and use me in the game plan a lot, I’ll be ready for it. That’s what I’ve been preparing myself for, ” said Ajayi, who was held out of the regular-season finale and didn’t take part in the team’s padded practice Wednesday. “I’m getting ready for war. This is a three-game season. I am leaving it all out on the line.”

0 thoughts on “GIVE ME THAT ROCK, EAGLES’ WORKHORSE JAY AJAYI SAYS!”