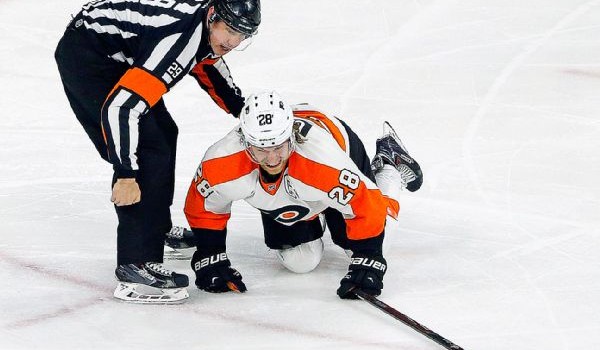 GIROUX FELL TO ICE AND FLYERS NATION HELD ITS BREATH

As poorly as the Flyers have been playing this season, the last thing they need is for their best player and captain to suffer a serious injury.

Flyers captain Claude Giroux is as durable as they come, missing five games in the past six seasons, but he sustained an injury Friday in a 2-1 loss to the Carolina Hurricanes that appeared to be serious.

As it turns out, Giroux might not even miss Philly’s game against the New Jersey Devils on Saturday.

After several moments, the trainers helped him to the locker room. He did not place any weight on his left leg.

“I knew I got hit,” Giroux told CSN Philly after the game. “I tried to put pressure on it and it was really weird and didn’t feel really good, so I kind of panicked a little bit. The doctors did a good job, and I’m pretty lucky they were there.”

The Hurricanes thought the injury was serious too. Giroux and doctors went into Carolina’s tunnel, which was closer than Philly’s.

“[Carolina] saw it was cut and there was blood, so everybody panicked, and I didn’t help the cause either by panicking,” Giroux said, “but I’m just happy it’s good.”

Giroux is among the NHL scoring leaders with 43 points (13 goals, 30 assists).

“I was very concerned,” Flyers defenseman Mark Streit said. “He was obviously in pain on the ice. Things like that are always scary. He is the most important guy to the team.”

“[The doctors] said it helped me, so I was pretty happy about that,” Giroux said. “I’m not even sure (how many stitches) to be honest. I didn’t even ask.”

“It’s going through your mind,” Berube said. “The guy can’t get up off the ice, but fortunately it’s not (serious). It was worrisome, obviously. You could tell he was cut, and when that happens, you obviously worry.”

Giroux said he could be in the lineup Saturday.

“Probably,” he said. “… I’m not a doctor or anything, but I’m pretty sure I got lucky there. It was pretty scary.”