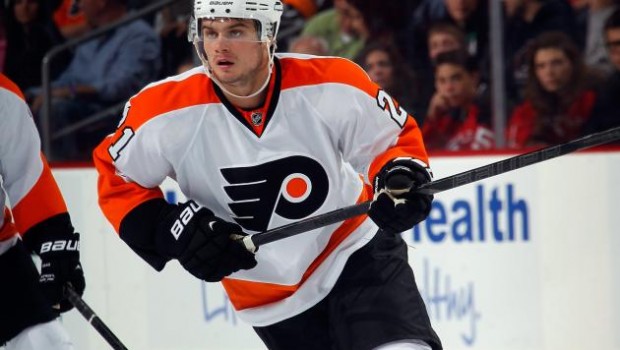 GIROUX OUT, LAUGHTON IN FOR TONIGHT'S FLYERS-RANGERS GAME

One day after they pooh-poohed Claude Giroux’s health issue as not very serious, the Flyers admitted he sustained a foot injury — actually a “lower body injury” — and will miss two games including tonight’s game in New York,

The good news is that Scott Laughton (photo above) has been recalled from Lehigh Valley of the American Hockey League to take Giroux’s place.

“He was examined by a doctor [on Monday night] and everything looked fine, but between [Monday] night and [Tuesday] morning the injury didn’t react the way we had hoped upon further examination and we decided to shut him down,” Hextall said.

Hextall said Giroux will miss tonight’s game against the New York Rangers at Madison Square Garden and will likely be out Thursday against the Minnesota Wild at Wells Fargo Center.

Asked why Giroux waited to get examined if the injury occurred during practice, Hextall said, “Good question. He was fine at that point, but as the day went on it got worse.”

Hextall said he expects the injury to keep Giroux off the ice a few days, not weeks.

Giroux wasn’t in the building for practice Tuesday because of a maintenance day. In Giroux’s absence, Brayden Schenn shifted from left wing to center on the top line. He was alongside R.J. Umberger and Jakub Voracek.

“I don’t know the severity of it,” Schenn said. “Haven’t seen or talked to him since [Monday] so I guess we’ll wait and see. Hopefully it’s not too serious. I haven’t heard anything so we’ll have to wait and see.”

Schenn is a natural center but has spent most of the season at left wing. He said a return to the middle wouldn’t faze him.

“It feels comfortable,” he said. “I’ve played it enough. It’s an easy transition for me. Wherever I’m thrown [Wednesday] I’ll be ready for it.”

Umberger has one goal and three points in 16 games but none in his past nine.

Could playing with Voracek, who entered play Tuesday as the NHL’s leading scorer, get him going offensively?

Also helping is some chemistry Umberger and Voracek had as teammates with the Columbus Blue Jackets.

“I played about three years with Jake in Columbus and had a lot of success with him,” Umberger said. “I know it’s been a lot of time since then but hopefully it’ll feel the same.”

Berube said the move had more to do with Umberger’s size and skill set rather than any history he and Voracek have. He said one of his projected combinations during the summer was Umberger starting the season with Giroux and Voracek on the top line. He opted for Schenn there to start the season but that lasted two games; Michael Raffl had been playing in that spot prior to sustaining a lower-body injury Nov. 4.

“[Umberger] is a big winger and adds some size there,” Berube said. “Just some play at the net. With Brayden being in the middle now I need a guy to get in there a little bit more in the corners and get to the net. … My thinking was I wanted a big winger up there. He was in my thoughts in the summertime as a guy that could be up there with Voracek and Giroux. I just put him there and we’ll see how it goes.”