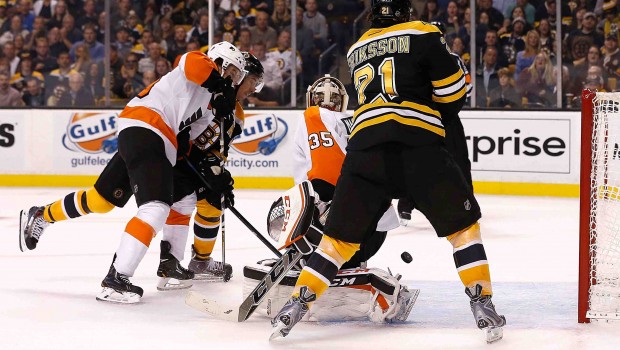 GIROUX: ‘FLYERS WERE SCARED TO MAKE PLAYS’ IN LOSS TO BRUINS

Kelly’s goal in the late third period was the winner.

The Flyers found themselves in a decent position late in the third period last night against the Boston Bruins in their NHL opener in Boston, but saw at least a single point slip away.

Philly got off to a slow start and managed only 20 shots on goal, but managed to somehow stick around, getting a tying goal from Sean Couturier early in the third period.

Not enough, as it turned out.

The Flyers found themselves under pressure, out-shot in two of the three periods.

Based on the comments of their captain, Claude Giroux, held without a point and just one shot on net, it seemed like they were never really got comfortable in this one.

“The first two periods, it was like we were scared to make plays,” Giroux told the Inquirer.

“I don’t know about the other guys, but I would get the puck and I didn’t get the confidence to make a play . . . I need to relax, play the game.”

The Flyers’ power play, second best in the league in the
preseason, was 0-for-3 with four shots on net.

Their defensemen were sloppy and gave away pucks
and they took silly penalties, like when Zac Rinaldo couldn’t help himself in the first period and his slashing minor led to a Bruins power-play goal by Reilly Smith.

Eventually this all caught up with the Flyers, who hung around all night before losing late 2-1.

Chris Kelly scored with 1:51 to go for the Bruins, who led 1-0 from the first period until early in the third when Sean Couturier knotted the game.

Flyers goalie Steve Mason didn’t have to make a lot of tough saves, but was very solid in net. He had no shot at Smith’s first-period goal.

Center Sean Couturier, moved up from a checking line to a scoring line this season, showed good offensive instincts getting to the net and redirecting a Jakub Voracek pass to slot past Bruins goalie Tuukka Rask 4:19 into the third for a 1-1 tie.

Giroux looked rusty getting no points and one shot in 26 shifts. The Flyers best draw man also lost 17 of 21 faceoffs.

Rinaldo took two penalties, one in the first that led the Boston scoring the opening goal and another 13:59 into the third with the game tied 1-1.