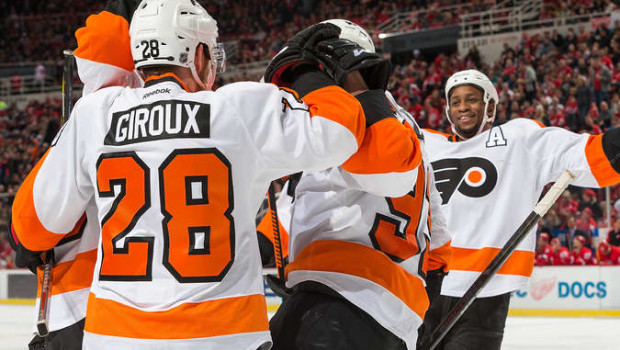 GIROUX AND VORACEK GIVE FLYERS 2-1 SHOOTOUT WIN AT DETROIT

The Flyers’ 2015 golden pair got together Sunday and the result was a shootout victory.

Claude Giroux and Jakub Voracek scored in the shootout to give the Flyers a 2-1 win against the Detroit Red Wings Sunday at Joe Louis Arena.

After Giroux matched Detroit’s Pavel Datsyuk’s goal in the second round of the tiebreaker, Flyers goaltender Michal Neuvirth stopped Brad Richards to start the third round. Voracek then ended the game by snapping a shot through the pads of Detroit goaltender Petr Mrazek.

“It’s a big win for us. We’re playing very well over the past two months,” Voracek said. “For two periods, I thought they were the better team. But we started skating in the third period.”

The Flyers have the worst winning percentage in the shootout (32-66, .327) since the NHL adopted the tiebreaker in 2005. They lost 2-1 in a shootout to the New York Rangers on Saturday.

“It’s an important win for our team,” Flyers coach Dave Hakstol said. “Our guys have continued to battle hard for one another and that’s what this one was to help us find a way.”

“It’s not the result we want, from a process standpoint,” Red Wings coach Jeff Blashill said. “I thought we did lots of good stuff. I think we need more net presence and we obviously need more results in terms of scoring goals.”

Giroux tied the game by beating Mrazek with a one-timer from the bottom of the right circle off a pass from Voracek on the rush. It was Giroux’s 13th goal.

“We tried to keep our composure … We were down a goal and kept on battling in the third,” Giroux said.

Flyers rookie defenseman Shayne Gostisbehere appeared to have scored the winning goal with 1.6 seconds left in the third period, but the goal was waved off because Simmonds, in front of Mrazek, jumped up and his rear end hit Mrazek in the head, knocking Mrazek down.

“It’s a fast game and a tough game to officiate,” Hakstol said. “A lot of things happen. All night long, we moved onto the next play.”

Datsyuk hit the crossbar with a little under seven minutes left in the third period, about three minutes after the Red Wings killed off 1:36 of a 5-on-3 Flyers power play.

Kronwall gave Detroit a 1-0 lead with 1:35 left in the second period when his shot from the point deflected off defenseman Radko Gudas, tumbled over Neuvirth’s shoulder and slid into the net. It was Kronwall’s third goal of the season.

“[Darren] Helm was a great net-front presence so the goalie didn’t see anything. We got a lucky bounce there,” Kronwall said.

Hakstol challenged the goal, claiming that Helm interfered with Neuvirth, but the goal stood.

“Nobody really touched me. The puck never got to me,” Neuvirth said. “I lost it in the bodies and it bounced over my shoulder.”

Mrazek made a difficult glove save on Flyers defenseman Mark Streit’s shot from the bottom of the left circle with 7:37 left in the period and Neuvirth stopped Riley Sheahan, who was in alone, with his glove seconds later.

Mrazek made a pad save on Simmonds’ tip attempt from just outside the crease 3:27 into the second period.

The Red Wings got a five-minute power play 2:20 into the game after center Ryan White was assessed a match penalty for elbowing Detroit forward Tomas Jurco, who had just taken a shot from the right circle. White’s elbow caught Jurco in the face. However, the Flyers killed off the long power play.