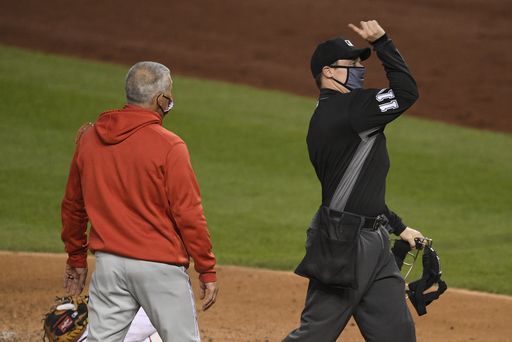 Bryce Harper was hitless in his return to Washington and manager Joe Girardi was ejected in the third inning of the Phils 5-1 loss to the Nationals on Monday night that dropped the Phillies back to .500 and hurt their playoff hopes.

”We played poorly, really poorly and that’s what bothers me more than anything,” Girardi said. ”We didn’t swing the bats well and sometimes that plays into it. We need to play better moving forward if we want to play in October.”

A day after striking out with the bases loaded in the seventh off a loss to Toronto and coming out of the game, Harper went 0 for 4 with three strikeouts as the designated hitter, dropping his average to .254

Harper said he’ll play in the outfield for one game of today’s doubleheader and be the designated hitter for the other.

”We have to win,” he said. ”There’s no time to complain. We have to get out there and get going.”

The third-place Phils, trying for their first postseason appearance since 2011, fell to 27-27 with six games left and dropped behind Cincinnati (28-27) in a crowded NL wild-card race. They’re clinging to the league’s final playoff spot, a half-game ahead of Milwaukee (26-27) and San Francisco (26-27).

Girardi and center fielder Roman Quinn were ejected in the third inning for arguing a call by plate umpire Junior Valentine.

Girardi came out of the dugout to argue after Quinn took a called third strike on an 84 mph splitter from Anibal Sanchez with a full count. Quinn was replaced by Mickey Moniak, who went to left. Adam Haseley shifted from left to center.

Philadelphia lost to the defending World Series champions for the first time in seven games this season. The Nationals are last in the NL East at 21-32.

Sanchez (3-5) allowed one run and four hits in five innings and combined with four relievers on a six-hitter.

Philadelphia scored its only run in the fifth when Sanchez was called for a balk with Moniak on third.

”I didn’t feel like I had my best stuff, a little out of sync,” Wheeler said.

Asdrubal Cabrera hit an RBI single in the first, and Washington took a 2-0 lead later in the inning when Brock Holt stole second and catcher Andrew Knapp’s throw got by second baseman Andrew Knapp and into center field for an error that allowed Juan Soto to score from third.

”The two teams that we have the reminder of the week are in a better spot than we are,” Holt said, referring to the Phillies and New York Mets. ”The thought of playing spoiler too can kind of motivate you.”

Luis Garcia added an RBI groundout for a 3-1 lead in the fifth, and Brock Holt hit a two-run single in the seventh off Blake Parker.