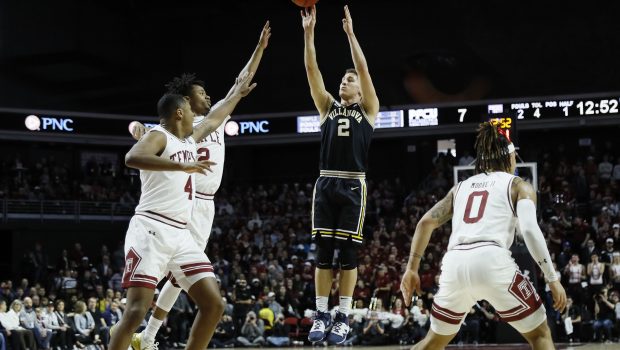 Collin Gillespie had a season-high 29 points and a career-high seven 3-pointers to lead No. 15 Villanova to a 76-56 victory over Temple for the Big 5 title..

Jermaine Samuels added 13 and Jeremiah Robinson-Earl had 10 for Villanova (19-6), which won its seventh straight game over Temple while finishing 4-0 in the Big 5.

The Wildcats already had clinched at least a share of their 27th title with wins earlier this season over the other three Philadelphia rivals. They are now tied with Temple for most Big 5 titles.

Villanova quickly erased a four-point halftime deficit by hitting three 3-pointers, the last by Gillespie with 17:43 remaining that put Villanova up 35-30. Temple committed three turnovers on each of its first three possessions to open the second half and didn’t attempt a field goal during the Wildcats’ 9-0 spurt.

Justin Moore’s 3-pointer with 14:16 left gave Villanova a 46-32 lead and capped a game-changing 20-2 run to open the second half. Villanova made 7 of 10 shots, including 6 of 8 3-pointers, during the stretch while Temple was 1 of 8 from the field, 0 for 3 from beyond the arc and committed five turnovers.

Temple got within seven at 49-42 on Rose’s drive with 10 minutes left, but never got closer.

Gillespie hit a pair of 3s to open the game, giving Villanova a 6-0 advantage that would be its largest lead of the half. Temple benefited from some early Villanova foul trouble as Wildcats starters Moore and Robinson-Earl had two fouls apiece just 4:20 into the game.

Temple took its largest lead of the half on Rose’s jumper that made it 28-22 with 2 1/2 minutes left, and the Owls were up 30-26 at the break when Rose followed his own miss with a second to play.