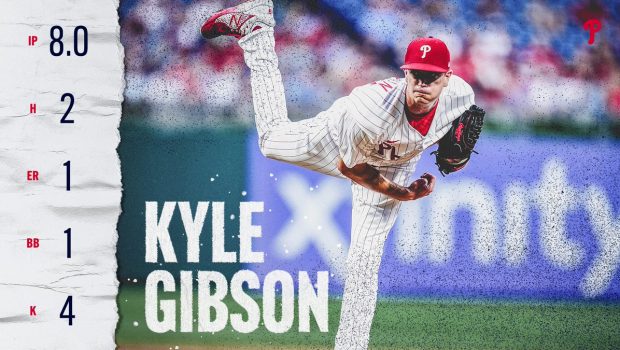 The Phils are now 58-48, tied with the Cards and Brewers for the third wild card playoff spot, just 1 1/2 games behind the Pads who are in the second spot.

Rhys Hoskins, J.T. Realmuto, Nick Castellanos and Darick Hall also homered for the Phillies, who have won eight of nine to solidify their standing in the race for the NL’s third and final wild-card position.

Gibson (7-4) overpowered Washington’s lineup, weakened significantly after the club traded Juan Soto and Josh Bell to San Diego this week. He struck out four, allowed two hits and hit two batters over 105 pitches in his first start in nine days after taking bereavement leave for the death of his grandmother.

“Whenever you can execute pitches consistently and you feel like you are executing pitches in the right spot, you are locked into things and not thinking about adjustments,” Gibson said.

With four pitches getting mixed and matched and working on the corners, Gibson was able to force soft contact for most of the night.

“His two-seamer was really good,” Nationals manager Dave Martinez said. “His cutter was good. He didn’t throw a slider for a strike until, like, the third time through the order. But man, that was pretty nasty.”

Gibson forced 12 groundball outs, including a sparkling backhand defensive play by third baseman Alec Bohm on a hard-hit ball by Ildemaro Vargas to end the sixth that kept the dream of a perfect game alive.

“Once you get through the first time around the lineup, you start thinking about it,” Gibson said. “And then, when you get that play from (Bohm), you start chasing it, knowing you have one more time through the lineup. And it was a lot of fun.”

Washington’s Victor Robles broke up the perfect game by getting plunked with a sinker in his left forearm to begin the seventh inning. The next batter, Luis Garcia, ended Gibson’s no-hit bid with a clean single into left field over the glove of Bohm.

“I got tired for my first time on the mound in a while,” Gibson said. “I stayed on my throwing routine, but not on my cardio routine. So I started losing my legs a bit and got the ball up.”

“That was the sharpest he has been,” Realmuto said. “From the bullpen on.”

The Nationals/Expos franchise has not been no-hit since David Cone’s perfect game against Montreal on July 18, 1999.

Gibson surrendered his only run in the eighth, when Vargas lifted a sacrifice fly to center, scoring Lane Thomas. Garcia scored Washington’s second run in the ninth off reliever Brad Hand.

All of the offense that Gibson needed came in the first inning when Philadelphia jumped on starter Josiah Gray.

Hoskins hit a solo shot to right for his 22nd homer to start the scoring. Two hitters later, Castellanos crushed an inside fastball to deep left field for his 10th, making it 3-0. Hall immediately followed with his sixth homer since being called up from Triple A Lehigh Valley on June 29.

Realmuto — who fell a double short of the cycle — lifted a high-arcing homer that sneaked over the left-field wall for a two-run homer in the third.

Gray (7-8) was charged with six runs over four innings.

“He didn’t quite have his best stuff tonight and we were able to take advantage of it,” Realmuto said.

Schwarber closed out the Philadelphia scoring in the seventh with a rocket that hit the steps inside the home bullpen in deep right-center.