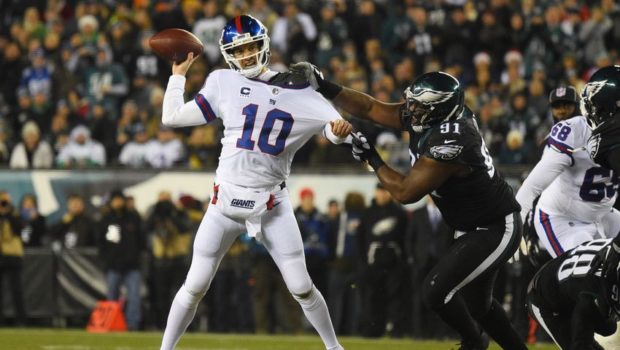 The Giants just announced that Eli Manning will start for Jones, who supplanted Manning as the Giants’ starter after two games, and was officially ruled out due to a high ankle sprain. Also ruled out for the Giants were tight ends Evan Engram (foot) and Rhett Ellison (concussion), along with cornerback Corey Ballentine (concussion).

Engram, who has missed three games over four weeks, was a limited participant in practice this week but was deemed “ready to go” by coach Pat Shurmur on Friday. He leads the team with 44 receptions and has 467 yards and three touchdown grabs in eight games.

His return would have given Manning a full complement of weapons on offense as the Giants (2-10) try to snap an eight-game skid. The Giants still haven’t had Engram, receivers Golden Tate and Sterling Shepard, and running back Saquon Barkley on the field together this season.

Tate, who is second on the Giants with four receiving touchdowns, missed last week’s loss to the Green Bay Packers. He is set to play his first game with Manning after missing the first four weeks of the season for violating the league’s policy on performance-enhancing substances.