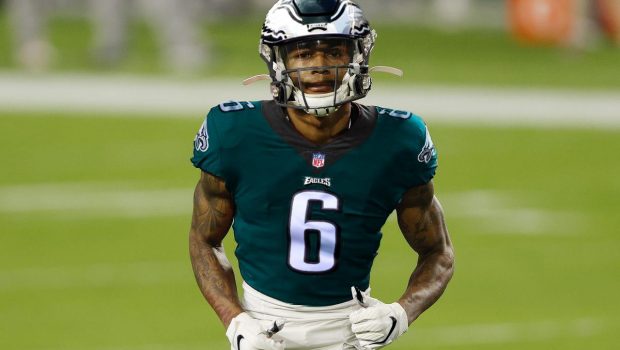 GIANTS PISSED EAGLES TRADED OVER THEM TO GET DEVONTA SMITH

ESPN’s Adam Rittenberg interviewed college coaches after the NFL Draft and one SEC defensive coordinator had an interesting nugget regarding Smith and the Giants’ plans to draft him.

“The Giants wanted DeVonta bad,” the defensive coordinator told Rittenberg. “They were pretty livid when Philly moved in front of them.”

This was the first time Dave Gettleman has ever traded down in the draft in his eight seasons as a general manager, even admitting Eagles general manager Howie Roseman tried to trade with the Giants to get that No. 11 spot.

The Eagles were just able to find a way to trade up and get Smith — and leapfrog its division rival in the process.

“That was part of it. (Eagles general manager) Howie (Roseman) is not afraid to trade with anybody,” Gettleman said in a conference call with reporters earlier in the week. “I had a conversation with him earlier in the week and he said, ‘Dave, do you have any problems trading with me?’ I said, ‘No, if it works for both of us, it works for both of us.’ They made the trade [with the Cowboys] and we decided to trade back.”

The Giants missed out on Smith and now they will have to face him twice a year for the next several years. Insult to injury.