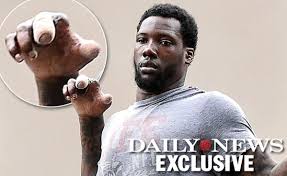 New York Giants defensive lineman Jason Pierre-Paul has finally shown his hand to the world — and it doesn’t look good.

In shocking photos, obtained exclusively by the Daily News on Thursday, Pierre-Paul’s mangled right hand is completely visible for the first time, with no large bandage obscuring the extensive damage. In the photos he is clearly missing his right index finger and has small bandages on his middle finger and thumb.

Pierre-Paul injured his hand in a fireworks accident on July 4.